Lagos amateur boxers are expected to do battle in the ring as the Lagos Hall of Fame Monthly Boxing Show resumes for its 102th edition at the Sports Hall, Mobolaji Johnson Sports Centre, Rowe Park, Yaba on Saturday. 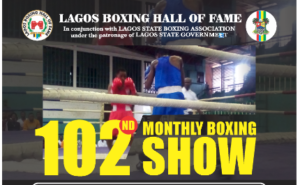 Madagascar Coach: We have Nigeria to think about