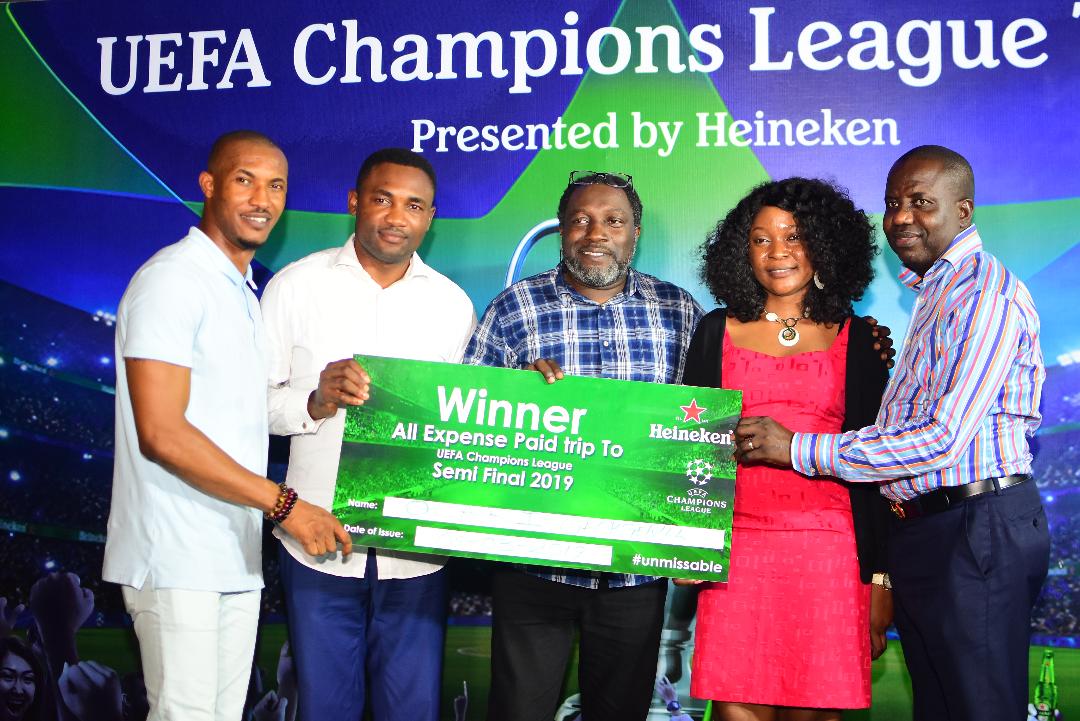 Heineken has concluded plans to give not less than 12 football fans from Nigeria opportunity to watch the semi-finals and finals matches of the UEFA Champions League live in Europe.

Heineken Brand Manager, Mfon Bassey made this known in Lekki, Lagos on Tuesday at one of the Heineken sponsored champions League viewing centres in the country.

The match will be played at the 68,000-capacity Estadio Metropolitano on the Avenida Luis Aragones in north-east Madrid, Spain.

According to Bassey, the football fans for the Europe Champions League trip will emerged from a raffle draw at the viewing centres.

The UEFA Champions League is one of the most followed sports competition in the world wit a fan base of about 1.1Billion. With the 2018/2019 season approaching the final stage in the next few months, Heineken is set to back up its 25-year sponsorship of the prestigious tournament by providing fans with exciting and entertaining ways to enjoy the football matches.

As part of this commitment to providing fans and consumers with the most remarkable and unmissable moments from this year’s Champions League, Heineken has partnered with hundreds of outlets across Nigeria to deliver premium viewing experiences to consumers nationwide.

READ ALSO: ‘Why I composed the Champions League Anthem’

Speaking on the announcement of the UEFA Champions League Trophy Tour, Marketing Director, Nigerian Breweries Plc, Emmanuel Oriakhi had this to say;

“The UEFA Champions League is the most coveted trophy in club football competition, and one of the most followed sporting spectacles in the world. Heineken’s rich history with UEFA has brought us some of the most iconic and unmissable moments in the history of football. From the unforgettable volley by Zidane to seal the 2001 Champions League final to the miracle of Athens where Liverpool overturned a 3-goal deficit.

These are the moments that make football such a passionate sport and we want to share these moments and experiences with fans across Nigeria. This campaign will see Heineken provide hundreds of experience centers where fans can view the Champions League matches in a premium ambiance that only Heineken can deliver.

We also plan to reward lucky fans with opportunities to watch the UEFA Champions League Semi-finals and finals. We’ve had a tremendous relationship with our consumers and we want to share in the passion for the game.”

Heineken has been proud sponsors of the UEFA Champions League since 1994. This illustrious relationship with UEFA has seen Heineken become one of the most recognizable brands in sports, particularly in European football.