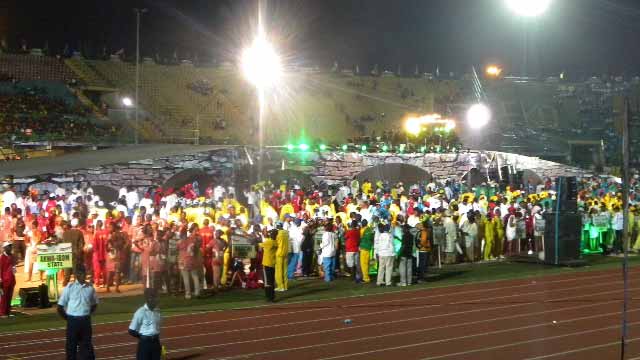 Adeboye Osomo, a spectator at one of the venues of the ongoing 19th National Sports Festival (NSF) in Abuja, on Sunday proposed to his girlfriend, Funmilayo Talabi, before many eyes.

Other spectators who were at the Package B of the National Stadium to watch a male volleyball event between Anambra and Rivers, were astonished to see Osomo down on his knees.

A surprised Talabi, with tears in her eyes, quickly drew him near and gave him a hug before presenting her finger for the engagement ring.

Osomo later told the News Agency of Nigeria (NAN) that both of them had been friends since their secondary school days and over the last 10 years.

The graduate of Federal University of Petroleum Resources, Effurun in the Uvwie Local Government Area of Delta, said he now works with AYM Shafa, a petroleum company in Abuja.

“My fiancée has been a source of inspiration to me right from the time we have been together,’’ he said.

Talabi also told NAN she was surprised, even as she had been expecting the proposal. “But not in such manner,’’ she added

Babaganaru: I expects the best of Nura Mohammed next season