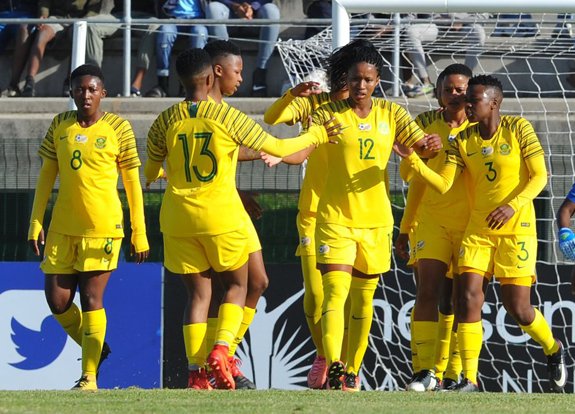 South Africa became the first team from Group B to qualify for the semi-finals of the 2018 Africa Women Cup of Nations after hammering Equatorial Guinea 7-1 on Wednesday in Cape Coast.

Striker Chrestinah Kgatlana, who was making her first start of the tournament netted a brace and an assist in the demolition exercise.
The Bayana Bayana started well and under one minute, they won the first corner kick of the match and then the attack but Smeda with a weak after Jermaine Seoposenwe Celestina Besecu bundled over after attempting to shoot at goal with a laughable technique.

minutes after that incident, South Africa took the lead courtesy a penalty from winger Linda Motlhalo.
Centre back Dorine Chuigoge handled a cross from the right by Lebohang Ramalepe and flag from assistant referee Fatiha Jermoumu and that compelled referee Dorsaf Ganouati to point to the spot.

USA-based Motlhalo picked the ball and converted the spot-kick for the opened goal. (1-0)
After 22 minutes, defensive midfielder Nompumelolo Nyandeni found herself inside the opponents’ box and slotted home from close range to double the lead.

In the 28th minute Motlahalo made a surging run and was heading towards goal but she was pulled down by Akeng just outside the box for a free-kick was delivered by captain Janine Van Wyk into the arms of goalkeeper Emiliana Ndong.

Equatorial Guinea reduced the deficit just before the break when Elena Oyana profited from a poor clearance by Leandra Smeda.
Three minutes into the second half, substitute Rafiloe Jane played on Chrestinah Kgatlana inside the box who shot off-target.

Read Also: South Africa made it difficult for Eagles-Rohr

South Africa made their assertiveness count and a long ball from goalkeeper Kaylin Swart bounced and dropped in front of Kgatlana who raced forward to meet the goalie but instead of scoring herself she passed to Jane to pass it into the net for the third goal. (3-1)
On the hour mark, Kgatlana got her name on the scoresheet after dribbling past the goalie Ndong to shot into a gaping net. (4-1)

Three minutes, Kgatlana was put through again and the Houston Dash player darted to her right before smashing into the net for the fifth. (5-1)
Substitute Amanda Mthandi finished off a perfect assist from Motlhalo to make it 6-1 for Bayana Bayana in the 76th minute.

Desiree Ellis’ side did not take their foot off the accelerator striker Jermaine Seoposenwe 79th minute
South Africa now need a point in their last game against Zambia in Accra on Saturday to top the Group.

How Falcons fared against Zambia

2018 AWCON: I’m not yet happy with Falcons, says Dennerby