Shooting Stars FC of Ibadan on Wednesday said their fans would soon forget about the club’s travails playing in the lower league as it would get qualification to the elite division. 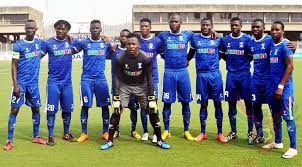 Tosin Omojola, Media Officer of the club, gave the assurance in an interview with News Agency of Nigeria (NAN) on the club’s readiness for the Nigeria National League (NNL) playoff.

The team was, however, relegated for the second time in 2017 and since then it has been struggling to bounce back to the elite league.

The team will this year play in the playoff of the NNL again after grabbing the sole ticket of the abridged NNL Group B1 ticket.

Shooting Stars will slug it out with other NNL clubs like Akwa Stars, Dynamite FC, Warri Wolves, NAF FC and Jigawa Stars.

On the readiness of the club for the playoffs, Omojola said that support of fans support would be rewarded with promotion ticket to the Nigeria Professional Football League (NPFL).

“We are set to make our fans happy once again. We got so close last year but this is another year to right those things that we did not get right then.

“We are fully set for promotion to the NPFL this year; the coach and the technical crew are already ensuring that the club returns to the elite division where we rightly belong.

“We know the intricacies involved and what the promotion means to the fans, so, we are working hard to gain our promotion and make our fans happy again,’’ he said.

Omojola said the technical crew would have to get the club ready ahead of the new life in the NPFL.

“I cannot really be certain on getting new players for the club because playing in the NPFL is a different game entirely.

“The technical crew knows what to do with the team and how to get the team ready for the task ahead.

“For now the team is being funded accordingly as there is no outstanding debt owed any player or the technical crew members,’’ he said. (NAN)