Odion Ighalo still won’t be in the top ten highest-paid footballers even if he signs his stunning £400,000-a-week contract and Shanghai Shenhua. 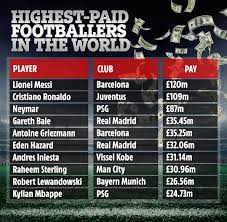 The on-loan Manchester United striker has been offered a staggering pay packet to ensure he commits his future in the Chinese Super League.

The move is likely to put a spanner in the works of Ole Gunnar Solskjaer’s transfer plans who was weighing up making Ighalo’s loan move a permanent one.

Shanghai’s offer will undoubtedly blow United’s out of the water with the 30-year-old facing the prospect of earning £20.8million before tax.

But amazingly it still won’t match some big names who are pocketing fortunes.

According to France Football, it comes as no surprise that Lionel Messi and Cristiano Ronaldo are the two highest earners currently taking home £229m between them.

A large gap starts to open to third-place Neymar, with the Paris Saint-Germain man banking £87m.

And he just narrowly pips Barcelona’s Antoine Griezmann, who is on £35.25m.

And despite playing for Japanese side Vissel Kobe, veteran Andres Iniesta is still making a mint on a salary of £31.14m.

Ronaldo, Georgina walk through centre of Madeira with kids despite coronavirus fears

Ronaldo, Georgina walk through centre of Madeira with kids…