Frenchman Eric Abidal has explained resignation from his position as sporting director this week in an open letter to Barcelona fans.

Abidal – a former Barcelona defender – had been at the club in a technical role since 2018 and assumed his position last summer with Ramon Planes (who has now replaced Abidal in the role) as his deputy, after the departure of Pep Segura and the resignation of vice-president Jordi Mestre.

The Blaugrana had confirmed his exit earlier this week but the reporting from the club appeared to show that it was not a personal decision from the Frenchman alone but one that had been taken alongside the club, which Abidal has subsequently clarified.

“I want to take advantage of these lines to say goodbye to all of you,” Abidal wrote on the Instagram post.

“I do so with the deepest gratitude for having been able to share two important stages of my life. One as a player and the other as head of the Technical Secretariat of FC Barcelona.

“This second farewell includes two years in which I have tried to work to make a better Barça. Two intense seasons that I have ended by my own choice.

“Despite the fact that the Board of Directors ratified me in my position on Monday, last Tuesday I submitted my resignation.

“In the last two years I have tried to make changes that I thought were very important for the future of the first team. Despite my conviction and my insistence, I have not succeeded. That is why I think the time has come to put an end to my relationship with the club.

“I want to record that I have renounced the year of contract that I still had with FC Barcelona.

“Today the situation of the club is complicated, but I have no doubt that I wish with all my heart that it can be overcome and that the successes return soon as they deserve to this great club.

“Eternal thanks to all.

Abidal’s sacking of Ernesto Valverde back in January was his major decision at the club – the signings of Antoine Griezmann and Frenkie de Jong were said to be concluded before his arrival, with only the arrivals of goalkeeper Neto and Real Betis wing-back Junior Firpo last season overseen by him. 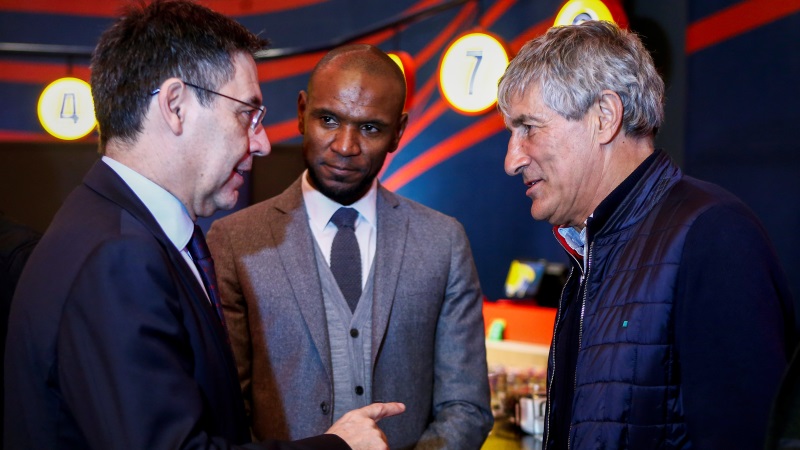 The former defender’s position was highlighted earlier in the season falling a high-profile spat with star Lionel Messi following on from Valverde’s sacking.

His position had been under increasing scrutiny for months following the internal chaos coupled with Barcelona’s trophyless season, which ended with a humiliating 8-2 defeat against Bayern Munich on Friday night.

Tension as eight Serie A players test positive for COVID-19

Brighton vs Man Utd: Ighalo returns to bench after Carabao…