The transfer deal of Nigerian born striker Kuti Ademola to FC Olympic Donetsk, a top division club in Ukraine has failed due to inconclusive negotiations and delay in the issuance of visa to the striker.

Ademola who made this disclosure to Sportinglife.ng in Abuja also revealed how he has lost other deals with some top division clubs like KS Kukesi of Albania, KF Partizani Tirana of Albania, Hamrun Spartan Of Malta, Kashima Antlers of Japan amongst others due to the same issues.

“Stalled negotiations and delay in visa made me lose the transfer deal and some pre-season matches at
clubs that invited me.

“The young striker was invited for a contract Deal by Fc Olympic Donetsk from Fujairah FC, United Arab
first division league where he played.

“The top division Ukraine club had been monitoring the progress of Ademola after Diego Maradona invited
him officially to the senior team of Fujairah FC,” announced the club.

The statement added that, Maradona was impressed by the striker’s way of scoring goals and playing
skills in the league where he topped the U.A.E. youth league table after scoring 22 goals in 18 matches
making them emerge as Youth league winners.

However, it added that due to the strict rules of the FA which allowed only two foreigners play in the
league competition Maradona had difficulties in featuring Kuti but at the end of the league Maradona
introduced kuti to the senior team where he was an asset to Fujairah FC who later gained promoted. 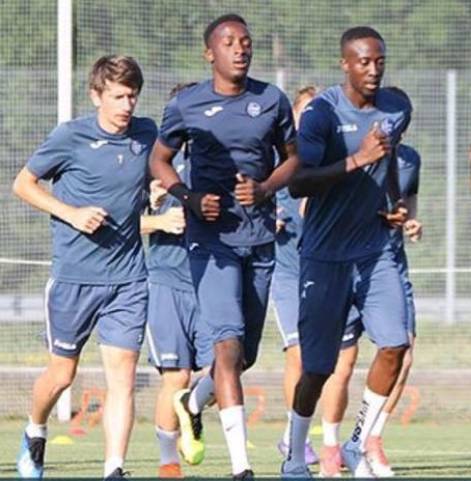 Earlier, Maradona during a press conference had announced his intention to sign Kuti who turned
20 on June 25, 2018 officially to the senior side of Fujairah FC for the 2018/2019 session amongst
Maradona’s 24-man list.

“Maradona has resumed on a three years contract deal as President of Dynamo Brest fc, a top division
club in Belarus, Europe.

“DynamoBrest Fc qualified for 2018/2019 UEFA Europa League and Maradona is saddled with the task of
ensuring Dynamo Brest Fc qualifies for the Champions League.
“Following all these incidents Kuti has expressed his dissatisfaction of unfair treatment by the management of Fujairah FC.

“He said he had endured lot of unfair treatments but Maradona’s coming to the club was a divine
intervention stressing that he really put in all his best but was treated unfairly by the management.”