Obstacles in life cannot stop a determined mind from reaching his target. That was the submission of Morocco Coach Hervé Renard, while making a retrospect of his involvement with football and team management.

The 50 year old White-shirt- wearing coach revealed in a chat with BBC that initial draw backs never diminished his love for football even if he did not play the game to his full capacity.

Renard who is fast becoming a Nations cup specialist haven led two countries to clinch the title back to back is itching close to leading Morocco the  title and his third triumph after leading Zambia and Cote d Ivoire to victory in 2012 and 2015 respectively. 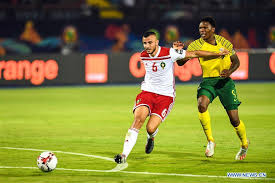 The former defender whose team has been spectacular so far at ongoing Nations cup in Egypt making a clean sweep of the group stage is reportedly being closely watched by some other African countries hoping to porch him should he be ready to move from his present deal which lasts till 2022.

The former Lille and Sochaux manager led Atlas Lions to their first World Cup outing in Russia last year and may all things being equal be leading them to the next World Cup in Qatar.

Some soccer fans addicted to betting on virtually everything in football have predicted that the former Angola coach will lead his team to the final in Egypt while at the same time insinuating that a move to Nigeria or South Africa will be his next step should he choose to leave his current contract.

Aftermath of Goal Blunder: I apologise for being human–Balogun