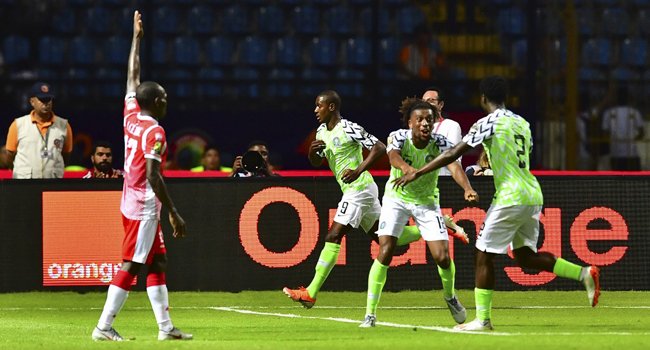 Some journalists in Akure on Sunday urged the Super Eagles of Nigeria to improve in their game against Guinea at the ongoing African Cup of Nations(AFCON).

The News Agency of Nigeria (NAN) reports that the Super Eagles defeated Burundi in their first game of the competion 1-0 to top group B as Guinea and Madagascar played a 2-2 draw.

Joseph Adesuyan, a Correspondent of Raypower/AIT, told NAN that the team had a good outing against Burundi although there was room for improvement.

Adesuyan said the technical crew needed to work on the strikers to create spaces and utilise hard earned chances.

“The Eagles had a good outing.The midfielders were at their best.definitely there has been improvement in the way the team played. But we still need to pay a lot of attention to the strikers in converting chances.

“Akpeyi had a good day in office, he should be allowed to continue in the next game. The game clearly shows that there are no minions in African football again,” he said.

Also reacting, Adewale Momoh of Daily Times observed that the players underated the Burundians because of the perception that they were participating for the first time.

Momoh said Mikel Obi was played as a creative midfielder which he had not played in over a decade.

He urged the team’s coach, Genort Rohr, to introduce Odion Ighalo to the starting line up against Guinea.

” Ighalo should be introduced early as a substitute if he is not going to be given a chance to start and the boys should stop holding the the ball for too long, that is not our style, we play free-flow football,” he said.

Dayo Johnson, a veteran sports writer, noted that Rohr showed his understanding of African football by preferring ‘rugged’ Awaziem when Sheu Abdulahi was injured to Leon Balogun as he also stuck with Omeruo in the defence line up.

Johnson also praised Rohr for making the required substitutes unlike before when he would have retained the line up till the last minute.

He also lauded the inclusion of Ola Aina as one of the revelations of the match, urging the coach to ensure that he played attacking football.

Femi Atolagbe of the Owena Press Limited, on his part, said the team did not play badly against the Burundians after the substitutes were introduced.

“On the choice of Akpeyi, I think Rohr needs to have rethink about that area though he had some saves.

” But I’m afraid in his handling of ball though I don’t know the rationale behind making him the first choice for the opener.

” The team needs to be more compact from defence to the attack. Chukwueze needs to be calm on the ball and do most of his dribbling from the wings,” he said.

NAN reports that the Super Eagles would play Guinea on Wednesday.

‘Groom Falcons Better ahead of Next World Cup’