Super Eagles winger, Samuel Kalu has revealed that the team’s victory over Cameroon in the round of 16 clash on Saturday at the Alexandria Stadium, Egypt has restored confidence back into the team. The Bordeaux of France winger in this chat with SportingLife.ng’s Taofeek Babalola in Cairo, believes that Nigeria can beat South Africa and go ahead to reach the final. Excerpt:
SportingLife.ng: Congratulations on the Super Eagles victory over Cameroon and qualification for the quarter-final.
Kalu: Thank you

Nigeria are now in the quarter final after beating Cameroon on Saturday. How do you feel about it? 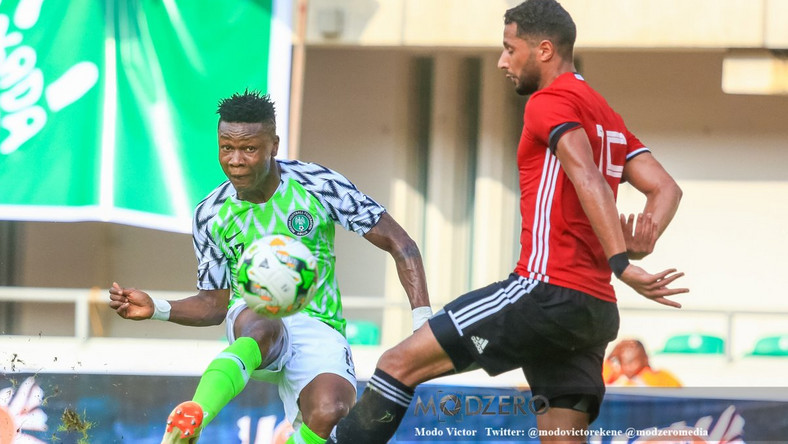 I am very happy now and all of us are happy about the victory over Cameroon. We know our next opponent now so we are good to go.
Many people expected Egypt as our next opponent but now we have South Africa. What is your thoughts on this?

It is just to show that there is no small team in the tournament. Everybody was expecting Egypt to beat South Africa but South Africa shocked them by 1-0. It just shows that they are no small team. We are not going to look down on any team. In every game, we will give all we can to get good result.

Nigeria played South Africa in the AFCON qualifiers, they beat us in the first leg in Uyo and we managed a draw in the return leg in South Africa. What do you think Nigeria should do to get a good result on Wednesday?
After losing 2-0 to Cameroon in Uyo, we also faced them in South Africa when we played 1-1, I think I played the game and I scored. The team is not new to us. We know them and they know us. On that that day, we will be expecting many things because we know them already and they know them already.  They will come all out at us and we will do the same to them too.

How have you been doing now after your illness?
After suffering from dehydration, the doctors told me to be drinking a lot of water and I am keeping to that. I don’t have any issues again.

After the game against Madagascar, the team’s self esteem dropped, but do you think the team’s victory over Cameroon on Saturday has restored confidence back into the team?
It is true that the Madagascar shock defeat affected us but after the win over Cameroon, We have confidence in the team now that we can make it to the final.  We know our opponent now and we will just do all we can to make sure that we win the game.

How can you describe the city of Alexandria. Are you going to miss the city?
I have not been here before and this is my first time in the city. We are just arrived in Cairo and I  don’t know anything will compare the two cities.