Nigeria’s U-20 National Team today failed to win the third place match at the 2019 U20 AFCON, losing  5-3 to South Africa on penalties, after the game had ended 0-0 in regulation time. 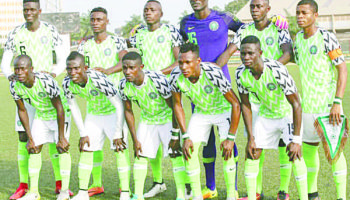 Nigeria should have themselves to blame, having dominated the game from the beginning to the end.

Nigeria’s only miss during the shoot-out was from Alhassan Adamu who was the first to step out, but saw his penalty saved by the South Africa keeper.

This would be the second time both teams are meeting in the tournament after the first match ended goalless in the group stage.

Nigeria were stopped by Mali from reaching the final via penalties in the semi final.

Both countries as well as finalists Mali and Senegal who play tomorrow’s final have qualified to represent Africa at the FIFA U20 World Cup in Poland in May.

Ikeme: I am Happy To Be Alive After Battle With Cancer