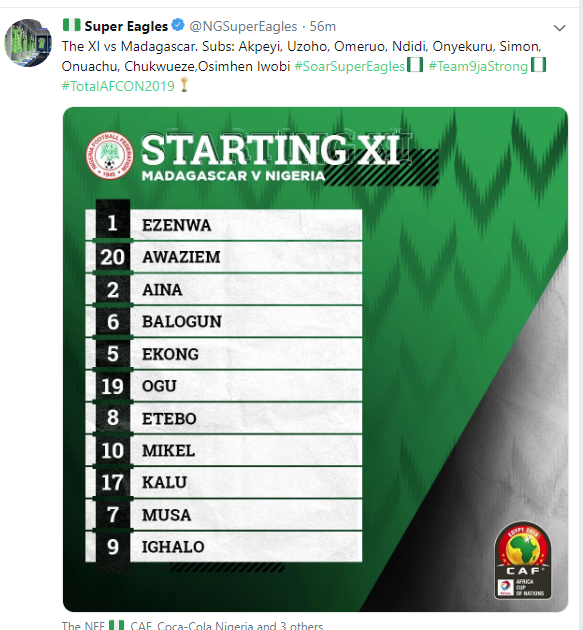 Super Eagles on Sunday lost 2-0 to Madagascar in their final Group B fixture at the ongoing Africa Cup of Nations.

Lalaina Nomenjanahary pounced on Leon Balogun’s slip in the 13th minute to give Madagascar a shock lead.

The Super Eagles came out fighting in the second half, but Carolus Andriamahitsinoro made it 2-0, ending the encounter as a contest.

Madagascar finished top with seven points, while Nigeria are runners-up with six points.

Arsenal attacker Alex Iwobi has been put on the bench while Samuel Kalu will be making his AFCON debut against Madagascar after suffering concussion before the tournament started.

Four players who missed Guinea tie have also been introduced into the squad.

Jamilu Collins and Shehu Abdul are still battling to get match fitness after respective injuries as Chidozie Awaziem and Ola Aina retain their full-back positions.

Udinese defender William Troost-Ekong comes in for Guinea match-winner Kenneth Omeruo, to partner with Leon Balogun in the heart of the defence. Rohr has decided to rest Wilfred Ndidi, bringing on John Ogu as his replacement and he will partner with Oghenekaro Etebo in midfield.

he remaining two attacking roles have been occupied by assistant skipper Ahmed Musa and Odion Ighalo who will spear-head the attack. Below is the list of Super Eagles stars that will face the AFCON debutants, Madagascar at the Alexandria Stadium.

Vice-captain Musa, who now plays for Al-Nassr in Saudi Arabia, believes the players will not be distracted against Madagascar, saying: “Once we all realised that the issue will be resolved whenever the NFF is ready, we kept the focus on football and let them handle talks off the pitch.”

Madagascar, ranked 108th in the world, are playing in their first ever Afcon and they’ve been one of the tournament’s surprise packages so far.

They picked up a commendable 2-2 draw with Guinea in matchday one and then beat fellow debutants Burundi last time out.

However, it remains to be seen if they’ve got what it takes to upset three-time Afcon champions Nigeria, who won both their opening games 1-0 and currently top Group B.

The Super Eagles, who have already booked their place in the last 16, are among the tournament’s favourites.

Nigeria vs Madagascar: Mikel may earn his 89th cap