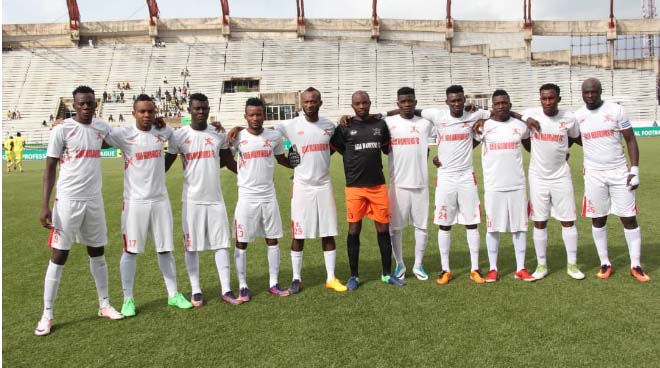 PLAYERS and Officials of Abia Warriors cheated death by the whiskers as they escaped a robbery attack in Ondo State on Saturday on their way to Lagos for the group stage of the Aiteo Cup.

Abia Warriors will face River United, Kano Pillars and Kwara United in Group C at the Agege Stadium from 24th to 28th September, 2018.

SportingLife.ng gathered that the incident which happened about 2:45 pm, saw some of the players sustaining various degrees of injuries out of panic.

Media Officer of the Club, Igwe Onuoha who confirmed what happened, informed SportingLife.ng that the injured players have been treated by the medics and will be assessed properly when the team gets to Lagos.

While narrating the ordeal, Onuoha said,“We thank God for our lives. We ran into a group of some dare devil armed robbers operating along the way in Ondo but by God’s Grace the team escaped. The shock is still affecting the players. Some of the injured ones have been treated and more treatment will be administered on them when we get to Lagos.

“We didn’t know it was robbery before. A Toyota Hummer bus had earlier overtook us and before we knew it, we just ran into them. It’s like they didn’t want to shoot at us as they were busy robbing that vehicle. You can imagine the panic and everybody was just trying to make an escape. We were able to come out except that those with injuries. The player attempted to jump out of the vehicle as it was not moving fast.

“It happened at a very quiet place in Ondo State. Nobody was able to tell me specifically where we were at that point because there was no signboard. I asked but nobody in the vehicle knew and can describe where we were, but it was in Ondo State,” Onuoha told SportingLife.ng.

Rohr to watch Iwobi against Everton in London