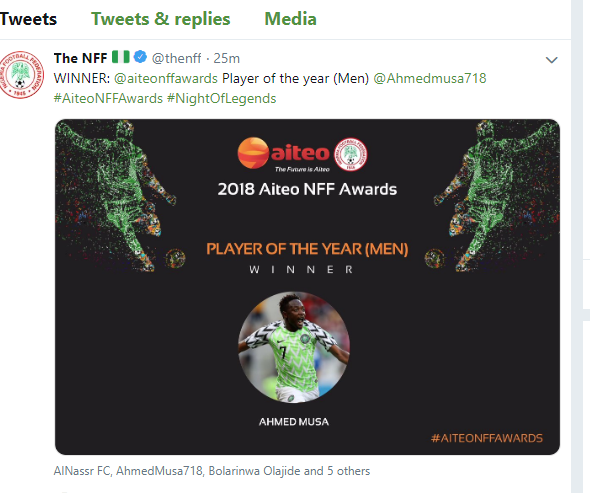 Ahmed Musa has been named as the Nigeria Player of the Year on Monday in Lagos.
The Nigerian Football Federation (NFF) staged the award at the Eko Hotels & Suites in Lagos.
The 26-year-old striker beat Arsenal forward Alex Iwobi and Shanghai Greenland Shenhua star Odion Ighalo to win the award.

Musa also won Goal of the Year award for his second goal against Iceland at the 2018 FIFA World Cup.

Recall that Musa was one of Nigeria’s stand out performers at the World Cup with his stunning goals against Iceland in Super Eagles’ second game in Russia.
Although the Super Eagles crashed out of the championship at the first round, his brace in the Eagles’ second game gave the fans something to cheer about.
Ighalo on his own side scored 21 goals for his former club Changchun Yatai, although that was not enough to save them from relegation from the Chinese Super League before he left.
Alex Iwobi also played crucial role in Nigeria’s return to African Cup of Nations championship this summer – having missed out of the last two editions.
Musa joined Saudi club Al Nassr from Premier League side Leicester City.

A mild controversy however stirred up when Nigeria Football Federation President, Amaju Pinnick on the occasion called Musa the Captain of the Super Eagles.

This instantly left dignitaries and football enthusiasts at the occasion to wonder if Musa is no longer a Vice-Captain of the Gernor Rohr led Eagles.

“…I want to say congratulations to my son, my captain; Ahmed Musa,” Pinnick said after he received the award on-behalf of Musa.

In the other categories, Samuel Chukwueze and Anam Imo won the Young Player award in the men’s and women’s categories. Super Falcons coach, Thomas Dennerby won the women’s of the year while Rangers of Enugu coach, Gbenga Ogunbote beat Super Eagles head coach for the Coach of the Year.