Former international Daniel Amokachi tickled the fancy of students and future stars at a local school in the Badarawa District of Kaduna state Tuesday.

In what could pass for ‘going back to the roots’ outing, the former Everton star revealed how delighted he was to see smiles on the faces of the students after he handed them Educational Backpack. The Bull as he is fondly called took to his twitter handle to upload a video of the said visit sealing the post with #KeepingItReal, #1girl1pen.

The effort of the former Super Eagles Assistant coach did not go unnoticed as former Arsenal great Nwankwo Kanu was among the first set of viewers to like the initiative.  The Bull’s effort is coming just few days after Super Eagles Captain

John Obi Mikel launched his catch them young foundation aimed at discovering young players to be nurtured into world beaters in future.

Amokachi,, was discovered while playing for Ranchers Bees by Nigerian national team coach Clemens Westerhof ahead of the 1990 African Nations Cup. He subsequently headed for Club Brugge in Belgium. 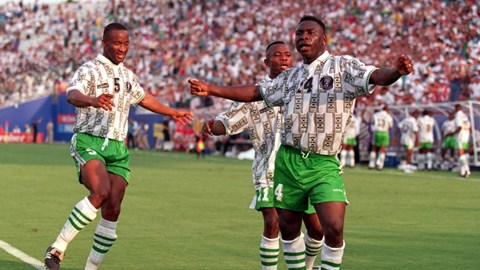 He competed in the Champions League and became the first player to score in the competition, after his goal secured a 1–0 win in the opening match in the group stage against CSKA Moscow.

Amokachi made over 44 appearances for the national team with 13 goals to his credit.  His famous dance at the 1994 World cup in USA has remains nostalgic among his fans.