Former international Emmanuel Amuneke’s Taifa Stars may be debutants to the Nations cup but they will not be cheap to handle.

That was the submission of Algeria coach Djamel Belmadi.  Algeria who last won the Nations cup in 1990 have been group against Taranga Lions of Senegal, Harambee Stars of Kenya and Taifa Stars of Tanzania in Group C.

Although Belmadi identified Senegal as the biggest challenge for his side in the group he nonetheless admitted that the debutants may turn out to be a pain in the neck.

“We will face the biggest challenge in Senegal, who are also one of the favourites. For Kenya and Tanzania, even though these two countries have not played the AFCON for several years, they still remain opponents against whom it will be necessary to play good matches and win. We will study the teams of the group well and prepare to be at our best on the day,” he told Cafonline. 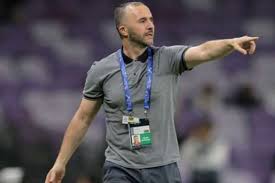 The former Qatar coach revealed the first step is to avoid crashing out in the group stage.

“Our goal at first is to go beyond the first round and then fight on till the final,” he enthused

Desert Foxes of Algeria have a date against Taifa Stars on July 1st, their last group match of the championship. It will be a clash between Belmadi who made his debut for Algeria a year after the won the Nations cup and Amuneke who won the

Nations cup as a player in 2004 in Tunisia. Algeria. Amuneke who coached Nigeria U-17 side and Sudanese club side  Al Khartoum SC before taking over as national team coach of Tanzania made history when he qualified the team for the Nations cup in 39 years, and will be looking forward to creating more records even as debutants.

They will open campaign in Egypt against Senegal on Sunday, followed by a clash against Kenya on June 27 before rounding off the group stage with a fight to the finish encounter against Algeria.

Fallout of Sick Players: Eagles dismiss fears of a depleted side ahead Burundi Opener