Ancelotti: Ronaldo’s only mistake was going to Juventus 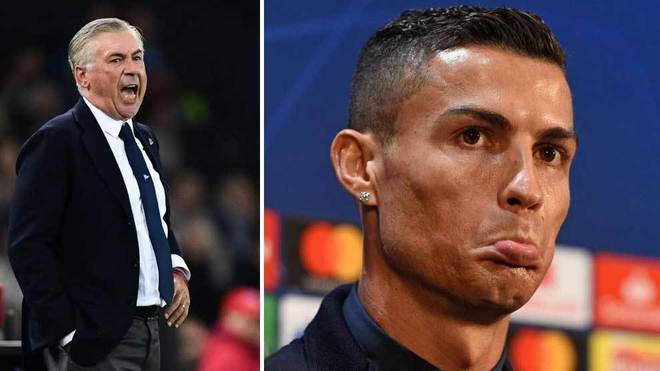 Napoli coach Carlo Ancelotti has embraced Cristiano Ronaldo‘s arrival in Italy, joking about his former player making a wrong choice concerning the team he signed for.

The former Real Madrid coach has indicated that the Portuguese’s transfer was a boost for the Italian Serie A.

“The arrival of Cristiano Ronaldo is an excellent sign for the image of the Serie A,” he told a press conference.

“For a long time it was the championship to which stars such as [Diego] Maradona, [Michel] Platini, Zico, [Zinedine] Zidane, Ronaldo, Andriy Shevchenko, Kaka , [Zlatan] Ibrahimovic, etc, went.

“Now Cristiano Ronaldo‘s arrival will restore that, as he is a great professional and his only mistake is to have gone to Juventus!”

Following that joke, the 59-year-old went on to talk about his new Napoli team.

“Today is different, as we don’t have Maradona but we build a real high-level team, especially with young players,” he added.

“For several years Napoli have played very well, so the quality is there.

“I will try to bring some experience and to help the team to have a little more personality and courage in some moments in which we play a little worse.

“There is no ‘Ancelotti style’, because I build my game according to the characteristics of my players.

“Some coaches start with an idea and try to get players to have that style, but I look what I have and I adapt my style to them.”

Finally, he also had some words for his former team, Paris Saint-Germain.

“It’s good to see how the club is growing,” he noted.

“PSG are one of the best in Europe and they can win the Champions League, that’s for sure.”

Napoli will face the French team on Wednesday.

Ozil has a strong influence on my game–Iwobi