Anthony Joshua Now Trains in the Forest ahead Miller Fight 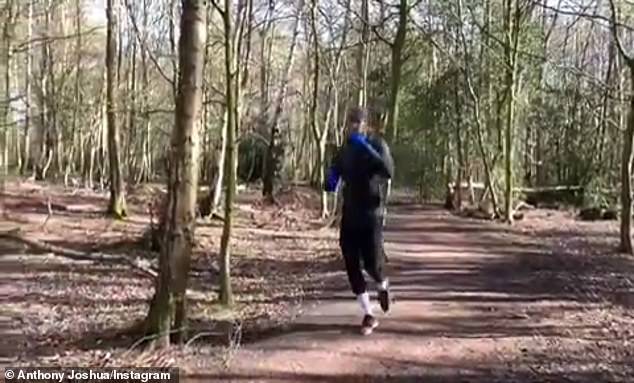 Anthony Joshua on Monday started training in the forest in preparation ahead of his fight against Jarrell Miller.

The IBF, WBO and WBA heavyweight king is currently training for his US debut in New York against the ‘Big Baby’ on June 1.

As he has since before taking gold at London 2012, AJ is putting in the grind in Sheffield, where he trains at the GB boxing base alongside the stars of tomorrow.

Though Joshua is believed to have earned close to £100million during his unbeaten career, he still lives in a cosy, two-bedroom flat during his strict training camp.

He made the most of one of the South Yorkshire city’s green spaces as he laced up his trainers and went for an early morning run.

Joshua was filmed by a member of his team on Instagram as he jogged through the trees on a crisp spring morning. The video was accompanied by the caption: ‘Road work like it’s 08’.

The temperature was not quite high enough for Joshua to go without his hat, gloves and multiple layers though.

Joshua then added two clips to his Instagram story of him shadow boxing along a paved area in a park. He threw some jabs, hooks and uppercuts while running backwards and away from the camera.

Joshua is expected to come through his fight with Miller at Madison Square Garden unscathed before turning his attention to a blockbuster showdown against either Deontay Wilder or Tyson Fury.

Wilder and Fury are due to have a rematch first after the heavyweight pair played out a controversial draw in Los Angeles back in December and talk has been unrelenting on when they will face-off for a second time in the ring.

Speaking to World Boxing News last week, Fury’s US promoter Bob Arum ruled out a reunion before the end of 2019 but suggested the fight is on the cards.

Broadcasting deals are proving to be a contentious issue in the heavyweight division after Fury agreed a lucrative deal with ESPN.

For now, Fury will face unknown German heavyweight Tom Schwarz in an interim fight on June 15 while Wilder will put his WBC belt on the line when he faces Dominic Breazeale at the Barclays Center in Brooklyn on May 18.