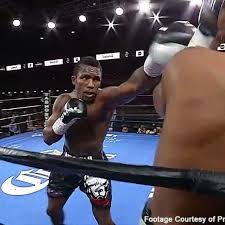 The bout that got great reviews ended in the seventh round with a violent finish from Apochi to send the American to the canvass.

Unlike Apochi, Nigerian-born Australia-based Wale Omotoso could not follow the footstep of his compatriot in one of the undercard fights. Omotoso was shut out by 154-pound prospect Chordale Booker in the 10 rounds bout.

Booker showed an impressive body attack that appeared to wind Omotoso, but did get tagged with a couple of nice right hands after briefly wobbling Omotoso in the penultimate round. Undaunted, Booker closed out the fight strong en route to a 10-round sweep.

“I had to watch him in the first two rounds to be able to understand his kind of boxer. But after the first two rounds, I had to change the tactics and I most times heard my coach telling me to use the jab and this really worked for me. I love this fight and this is the beginning of a big experience for me. Before this fight, I checked my opponent profile and I realized that he is such a good boxer. So I was warned not to go for knockout in the fight but to tag along and see what I can do. I think I am privilege to have a good technical backing that really helped me in this fight,” Apochi said after the victory.