Nicolas Pepe must improve the simple parts of his game if he is to start living up to his £72 million ($87m) price tag. 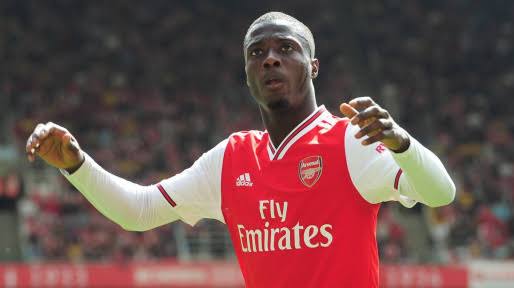 That is the view of former Arsenal striker Jeremie Aliadiere, who believes the winger has yet to show why the north London giants paid a club-record fee to sign him from Lille last summer.

Prior to football’s coronavirus-enforced suspension, Pepe had scored six goals and provided eight assists during his debut season in England.

However, despite the occasional flashes of brilliance, inconsistency has plagued the Ivory Coast international, with head coach Mikel Arteta admitting that the wideman is still very much a work in progress.

Pepe’s patchy performances have led to plenty of criticism, with Italian newspaper Gazzetta dello Sport even labelling him one of Europe’s four biggest flops of the season so far.

Aliadiere – who spent eight years at Arsenal between 1999 and 2007 – believes that’s an unfair assessment but he acknowledged that the 24-year-old needs to start proving his worth.

“I saw what he did with Lille last season and he is an amazing player,” Aliadiere told Goal. “So, I’m not denying his talent.

“What I’m seeing, though, is the most expensive player in Arsenal’s history and even if you don’t want to think about the money, the fact is that money is, unfortunately, a big thing in football.

Aliadiere, who now works as a television pundit and is often part of Arsenal’s media team at matches, added: “If you look at his stats, I would say he has had an alright season.

“Now, obviously it is not easy, as I know having been there, but the thing that has disappointed me a tiny bit is his decision-making during games.

“For a player who cost £72m, it’s the simple parts of the game that sometimes I see him lacking. And that’s what I pick on a bit.

“Yes, he goes on a good dribble and goes through two or three players – that’s amazing. But when you have (Pierre-Emerick) Aubameyang on your left and all you have to do is pass the ball in the right spot, and instead cut it back at the wrong time, that bothers me. And I’ve seen that quite a lot from him this season.

“Maybe with confidence, with more games, that will improve. But it’s that sort of thing – when he switches off and seems to lack concentration – that gets to me.

“That is something you can’t really have with top, top players who come for that sort of money. The easy stuff has got to be done properly.”

Pepe arrived at Arsenal towards the end of last summer’s transfer window, after Arsenal had also explored a potential deal for Crystal Palace winger Wilfried Zaha.

Former boss Unai Emery, who the Gunners sacked in November, has since admitted that he favoured Zaha because he already knew the Premier League, but that the Arsenal hierarchy moved for the unproven Pepe instead.

The former Lille attacker has openly acknowledged that adjusting to English football has been difficult, although there had been signs since the turn of the year that he was beginning to find his feet under Arteta’s guidance.

“I think Mikel could be the perfect match for Nico because he will not let him get away with things,” the former striker enthused.

“As a player, Mikel was all about quality and simplicity. You can’t miss a simple pass if you are five yards away because that costs goals and points.

“When we go on a counterattack, with the speed and pace we’ve got, we should be scoring many more goals. But if the final pass is not spot on, then you waste chances.

“That’s where I just feel Pepe’s been a bit lacking and maybe that is me being a bit picky because of the price tag.

“And that’s really what I’ve been saying, it’s more about the price. If we’d spent £35m on him, you’d say ‘great signing’. But when you think we have paid twice as much, you think, ‘He needs to do more.’

“We don’t have the resources of Manchester City or Paris Saint-Germain, so when we spend big money, we need to make sure we spend it on the right players.

“You can see he has unbelievable potential, talent and quality. Technically, he can do incredible stuff, but the simple things, sometimes he doesn’t do them spot on.

“That’s why I feel maybe we shouldn’t have spent that much on him.”

Mike Tyson in wrestling match with his Tiger