Unai Emery is living on borrowed time at Arsenal, with club staff now waiting to be told the under-fire coach has been dismissed. 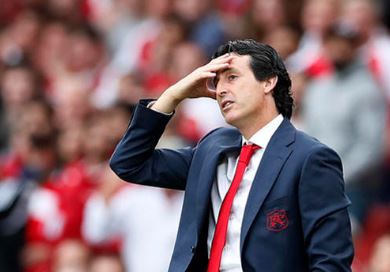 Pressure is increasing on the Spaniard, whose side have gone five games without a win in the Premier League and have fallen eight points adrift of the top four.

There were chants of ‘we want Emery out’ from Arsenal supporters during Saturday’s home game with Southampton, with loud boos greeting the final whistle despite Alexandre Lacazette rescuing a 2-2 draw with a stoppage-time equaliser.

That has frustrated many fans who are calling for the 48-year-old to be dismissed and has even surprised some members of staff who work for the north London giants.

One source has told Goal that there is a sense behind the scenes at Arsenal that it is now a case of when and not if Emery is sacked.

“It’s about results and we are not getting them,” the source said. “It just feels like a matter of time.

“It’s not like the club is on its knees or anything. The mood is still pretty good, but you are now just waiting to be told the news.”

There is a growing sense of frustration within the fanbase at Arsenal’s current plight, something that was highlighted by the reaction to Saturday’s draw and last month’s incident with Granit Xhaka, when the midfielder was clearly seen telling supporters to ‘f**k off’ after he was jeered off the pitch whilst being substituted against Crystal Palace.

Thursday’s Europa League tie against Frankfurt could be played out in front of the lowest crowd of the season, with tens of thousands of empty seats expected despite Arsenal having the chance to guarantee themselves a spot in the knockout stages of the competition with a game to spare.

The entire squad was given two days off following the draw with Southampton at the weekend and reported back to London Colney on Tuesday morning to prepare for the game.

Should Arsenal fail to get a result against Frankfurt, Emery’s position would be under massive threat – with Sunday’s trip to Norwich City potentially his last chance to keep himself in a job.

Goal has been told that the north London club have already been sounding out potential candidates to replace the former Paris Saint-Germain boss, although promoting first-team coach Freddie Ljungberg on a temporary basis remains the most likely option for now.