Arsenal youngster Joseph Olowu has signed for Cork City in the League of Ireland Premier Division.

The 20-year-old is on loan at the club for the rest of the season. 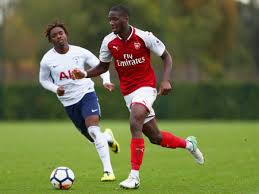 Olowu has been with Arsenal since he was 13 when he arrived from Charlton Athletic.

The academy graduate will be hoping to gain first-team experience at Cork.

He has played 12 times for the Under-23 team this term, scoring a single goal.

The defender will be at Cork until the summer.