The 23-year-old Queenslander, who only returned from a spell playing Big Bash cricket barely three years ago, cruised to 6-1, 6-3 victory over a nervous-looking opponent.

Her parents, Robert and Josie, were stranded in London, having flown in from Australia to meet up with her over the grass court season, not expecting her to win on her least favoured surface.

Barty becomes the first Australian to win a singles Grand Slam since Sam Stosur took the US Open in 2011.

The 23-year-old, who will now rise to world No 2 following the title win, becomes the first Australian to win the Roland Garros title since Margaret Court back in 1973.

‘I’m so proud of myself and my team. It’s just been a crazy two weeks.’ 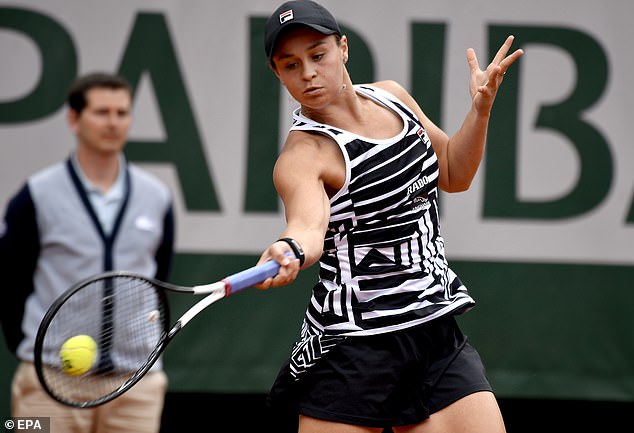 Vondrousova did brilliantly on Friday to overcome British No 1 Konta but the 19-year-old Czech looked frozen on Court Philippe-Chatrier as Barty punished the raft of mistakes from her opponent.

Barty has had the taste of winning a Slam last year in the doubles, after winning the US Open title with American CoCo Vandeweghe.

Just three years ago, Barty had a cricket bat – rather than a tennis racket – in her hands as she took a two-year break from tennis to play for Brisbane Heat in the Women’s Big Bash, where she enjoyed rich success. Now back in tennis, she is the most in-form player in the women’s game.

Barty looked like a woman possessed from the off on Saturday as she raced into a 4-0 lead against Vondrousova in the first set.

The 23-year-old, from Ipswich, Queensland, was well aware of how she threw away a 5-0 first set lead against teenager Amanda Anisimova in Friday’s semi-finals and she was determined to ensure that type of collapse did not happen again.

Thirteen winners from Barty, compared to just two from Vondrousova, in the opening set told the story. The Czech was overawed on a court she had not appeared on before the final.

Standing at just 5ft 5′, Barty did brilliantly with her return game, fizzing balls back at Vondrousova with purpose as she dictated with her go-to cross-court forehand.

Meanwhile in the men’s event Dominic Thiem produced a surprise package beating World number Novak Djokovic 6-2 3-6 7-5 7-5 7-5 to set up a final against regular winner on Clay Rafael Nadal on Sunday.