Aubameyang, Lacazette’s best yet to come–Emery

Arsenal manager, Unai Emery is convinced he can get even more from his £100million strike force despite the 30 goals Pierre-Emerick Aubameyang and Alexandre Lacazette have provided between them this season. 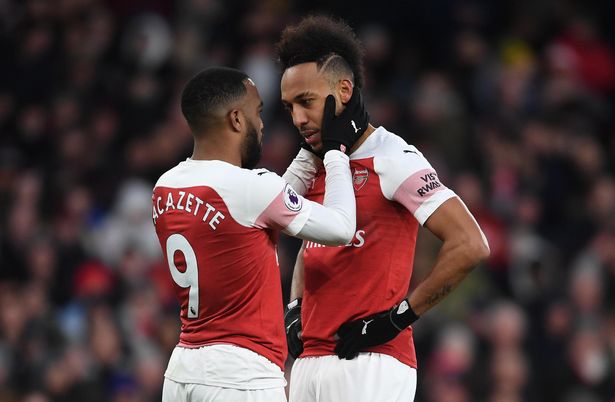 The two strikers, the most expensive signings in Arsenal’s history, have been among Emery’s best peformers this season, with Aubameyang in the running for the Premier League golden boot and Lacazette having become one of the top flight’s most complete forwards and the Gunners top assist provider.

At a time when many Premier League sides only use one central striker Emery has increasingly deployed Aubameyang and Lacazette as a pair up front to impressive returns. The duo were instrumental in wins over Manchester United and Rennes before the international break and could reprise their partnership against Everton today after the former overcame the high temperature which confined him to the substitutes bench for Monday’s win over Newcastle.

“My target is to have in my team a [quality] striker, but above all, to give them possibilities to score, doing one thing offensively,” Emery said.

“With the possibility of getting into the box with the ball and the player, every striker has developed with me in the past.

“I am very happy now, but I am very, very demanding of them to continue scoring, to continue creating chances, and also scoring for them, because all of the good things for them – individual scoring targets – is what’s best for the team. I did that in the past and in the present with them…

“In training I said to them, ‘When I have one ball, in training, I imagine you’ll score one goal, every time. Score, score, score’.

“That’s my mentality – I push them with this mentality. That’s the best development for them and for the team.”

FA Cup: Success will be available against Wolves