Serena Williams refused to blame a jarred ankle after suffering a remarkable Australian Open collapse in the quarter-finals against Karolina Pliskova.

From a set and a break down, the title favourite turned things around to lead 5-1 in the deciding set and had four match points but lost six games in a row to fall to a 6-4, 4-6, 7-5 defeat.

Williams had her first match point at 5-1 but, after being called for a foot fault on what appeared to be an ace, she jarred her left ankle and did not win another point on serve during the match.

The other three chances came with Pliskova serving at 4-5 but the Czech was rewarded for bravery on her forehand, and Williams insisted afterwards it had been her opponent who had won the match rather than she who had lost it.

Williams said: ‘There’s nothing I did wrong on those match points. I can’t say that I choked. She literally played her best tennis ever on those shots. 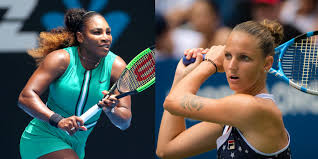 ‘I don’t really take losses well. But Karolina played lights out starting 5-1, 40-30. Literally, I’ve never seen anything like it. If anything, I think that’s a little bit easier to know, OK, next time I’m up 5-1 against anybody, I just need to make sure I play lights out when I have match points

Pliskova was happy to agree with Williams, saying with a smile: ‘I’m not going to go against Serena.

‘Normally I’m having lot of comebacks, but maybe from being a set down or a break down, so nothing like this. I think it’s going to be the best comeback ever so far in my life.’

Djokovic through to Australian Open semi-finals after Nishikori retires