Balogun: We fought together for six weeks

Super Eagles defender Leon Balogun has commended the team’s fighting spirit at the Africa Cup of Nations in Egypt. 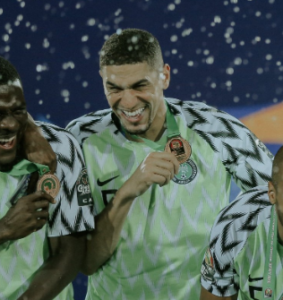 Balogun made his AFCON debut in the last group B game against Madagascar but his costly error gifted the Barea the victory in the match.
The opening goal for Madagascar came in the 12th-minute when John Ogu passed backward to defender Balogun. The ball was intercepted following an error by Balogun and Madagascar benefitted from the gaffe.
Madagascar doubled their lead in the 53rd minute as Andriamahitsinoro’s free-kick took a wicked deflection off half-time substitute Wilfred Ndidi. The deflection wrong-footed Ezenwa before bouncing in off the right post.
There are other individual error and team errors during the tournament but the Brighton & Albion of England said the team spirit helped them achieved the bronze medal and they are happy at the end.
“It is very difficult but you have to face the challenges, people will have ups and downs individually and a team also we have ups and downs. But I don’t think we have a problem in the team and we have a fantastic team spirit. I think the moment like this is good because we have been fighting for each other for six weeks and we are very happy” Balogun told SportingLife.
The former Mainz 05 of Germany defender said he is happy for winning the Bronze medal.
“We won third place medal because we lost to one of the best team in the tournament in the semifinal and they are playing one of the best teams in the final I think it is been fair.
“I think we have got a great team, great potential, and great ambition. We will just keep building that and keep the squad together. Hopefully, we will be more successful in the next one.”