Barca aim to seal title with home win against Levante

FC Barcelona will be crowned this season’s Liga Santander Champions if they win their home game against Levante in the Camp Nou Stadium on Saturday night. 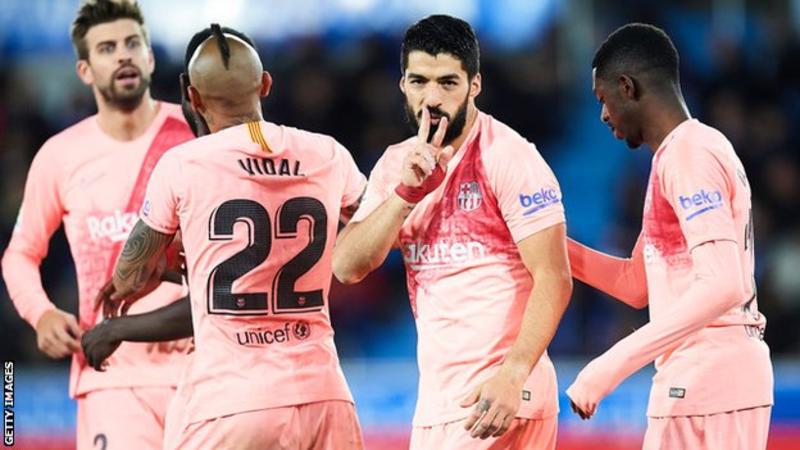 Three points for Ernesto Valverde’s side would keep them nine clear of Atletico Madrid with three games left in the season and with a superior head to head goal difference. Thus, it would be impossible for Atletico to catch them.

Barca could even be crowned champions a couple of hours before kick off if Atletico lose their home game against Valladolid, which kicks off at 16.15 local time, although Atletico are clear favorites to beat a side fighting to avoid relegation.

The league leaders will entertain Liverpool in the Camp Nou on Wednesday night in the Champions League semifinal and Valverde will pick Saturday’s side with half an eye on that vital game.

He rested half of his usual starting 11 for Tuesday’s 2-0 win away to Alaves, with Leo Messi, Jordi Alba, Clement Lenglet and Arthur all out of the side, while Sergio Busquets, Ousmane Dembele, Philippe Coutinho and Gerard Pique all played.

Most of those who started in midweek can expect to rest on Saturday, with possible exception of Dembele and Sergi Roberto, while others such as Malcom and Arturo Vidal will probably find themselves in the team.

Levante travel to the Camp Nou after a morale boosting 4-0 win at home to Betis on Wednesday night. That result ended a run of nine league games which had seen Paco Lopez’s side plummet down the table to such an extent that they kicked off on Wednesday in the relegation zone.

Three vital points have lifted the Valencia based outfit to 15th in the table, but with games against direct rivals, Rayo Vallecano and Girona to end the campaign, Lopez’s men can’t afford to travel to Barcelona just to make up the numbers.

Levante fans will hope players such as Jose Luis Morales and striker Roger Marti can cause an upset, while Barca will be hoping to get the title in the bag to allow them to focus all of their attention on Europa and the final of the Copa del Rey as they aim to complete a domestic and European treble.