Barcelona bounce back from Champions League nightmare with win over Getafe 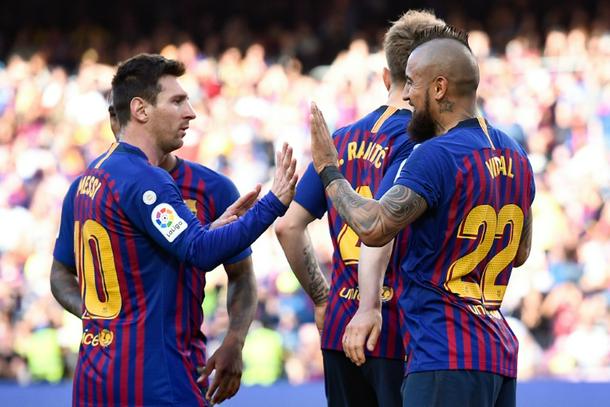 Barcelona’s Champions League recovery has begun and Getafe’s hopes of qualifying for the tournament could be over after they were beaten 2-0 at Camp Nou on Sunday.

Arturo Vidal and a Djene Dakonam own-goal saw Barca bounce back from their capitulation against Liverpool, even if their fans had not forgotten judging by the swathes of empty seats and scattering of whistles before kick-off.

Getafe might have hoped for their opponents to suffer a longer European hangover but instead they drop out of the top four, with one match left to play, after Valencia eased to a 3-1 victory over Alaves.

Valencia now sit fourth, level on points with Getafe but in front due to their superior head-to-head. They finish the season away at struggling Real Valladolid while Getafe are at home to Villarreal.

Barcelona’s victory means they stretch their lead at the top of the table to 11 points over Atletico Madrid, who were held to a 1-1 draw by Sevilla, and 18 ahead of Real, who lost 3-1 to Real Sociedad after Jesus Vallejo was sent off.

If they beat Valencia in the final of the Copa del Rey on May 25, Barca will claim a second domestic double in as many years but even that will not make amends for the collapse at Anfield.

Ernesto Valverde insisted on Saturday that he wants to continue as coach and a smooth end to the season, including winning the cup, might reduce the appetite for change.

They will be without the injured Luis Suarez for the final in Seville and the sight of Philippe Coutinho hobbling off against Getafe, clutching his hamstring, will be a concern.

The whistles before kick-off had not been unanimous, with some also chanting “Barca until the end”, but the empty seats at Camp Nou perhaps sent the loudest message.

Jorge Molina thought he had put Getafe ahead in the first half but was ruled offside by VAR and then hit the post in the 88th minute with a header from close range.

In between, Vidal gave Barcelona the lead, turning in the rebound after Gerard Pique’s header was pushed out by David Soria.

Molina might have equalised but instead Lionel Messi forced a late second after a one-two with Sergi Roberto was poked in by Getafe’s Djene.

Real Madrid’s revival from their own Champions League exit is yet to materialise as Zinedine Zidane’s side slipped to their second defeat in three games.

It is also now only three wins from eight for Madrid, who took the lead thanks to a brilliant individual goal from Brahim Diaz, the former Manchester City winger finishing after a mesmeric, weaving run.

But Mikel Merino equalised after a silky backheel from Willian Jose and Madrid defender Vallejo was sent off for saving a shot with his hand.

Thibaut Courtois parried away Willian’s penalty but La Real capitalised on their extra man as Joseba Zaldua headed in at the back post before Ander Barrenetxea drove past Courtois.

Real’s defeat confirms Atletico as the highest-placed club in the Spanish capital for a second consecutive year as the Wanda Metropolitano waved goodbye to their captain Diego Godin.

Atletico’s players formed a tunnel for the tearful Godin after the final whistle, with a message in the centre circle that read “Gracias Diego”.

Godin, who has announced he will leave this summer after nine years, was unable to finish with a home win after Pablo Sarabia cancelled out Koke’s deflected opener.

A point for Sevilla means they could yet snatch fourth place on the final day, as they sit two points behind Getafe and Valencia.

But Valencia are in pole position, Carlos Soler, Santi Mina and Kevin Gameiro giving them victory over Alaves to ease the disappointment of losing to Arsenal in the Europa League semi-finals on Thursday.

At the other end of the table, Girona are all but relegated. Their 2-1 defeat to Levante leaves them needing to make up three points on Celta Vigo, as well as a six-goal swing in goal difference next weekend.