Bayern Munich have smashed their transfer record to sign Lucas Hernandez on a £68million deal from Atletico Madrid.

The Bundesliga giants announced on Wednesday the Frenchman has penned a five-year contract and will join them from July 1 after completing his medical during the international break.

The signing represents the highest-ever fee paid by Bayern – their previous transfer record stood at £37.35m when they splashed out to sign Corentin Tolisso from Lyon in 2017.

Atletico had been keen to keep hold of the 23-year-old but Bayern showed interest in January and opted to activate his release clause.

Hernandez only committed his long-term future to deal Atletico at the end of last season but Bayern managed to sway him to join them.

Speaking of the transfer, Hernandez told Bayern’s website: ‘This is a really important day in my footballing career.

‘Bayern Munich is one of the best clubs in Europe and the world. I’m proud to be able to fight for all possible titles with Bayern. 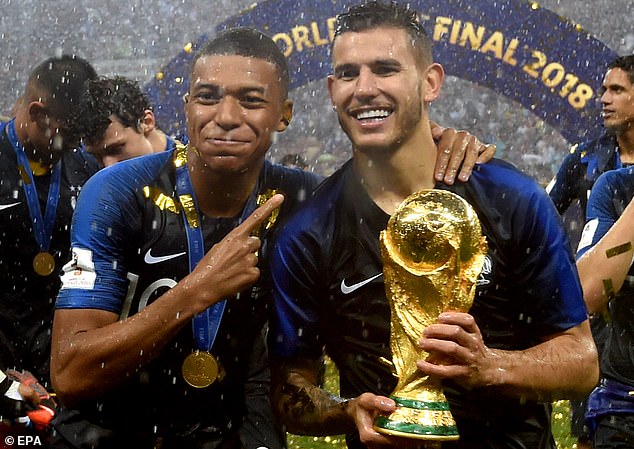 ‘I’d like to thank Atletico, the management, the coaches, my teammates and the fans for 12 wonderful years.

‘Atletico will always remain a part of me. Now I’m looking forward to taking the next step with Bayern.’

The Frenchman, who can operate as a centre back or full back, will significantly bolster Bayern’s defensive options and has been brought in to boost their chances of European success.

Bayern have been looking to bring down the average age of their squad and sign Hernandez with one eye on the future.

The defender, who was part of the 2018 World Cup-winning French team, will join his compatriot Benjamin Pavard at the end of the season in Bavaria.

Lucas has featured regularly this season, making 22 appearances in all competitions for Atletico and has been in and around the first team since the 2015-16 season.

Lucas’ departure will leave a huge void in Diego Simeone’s side and Atleitco are now expected to begin their search for his replacement.

Nigeria to participate in 2019 World Para Powerlifting in Astana