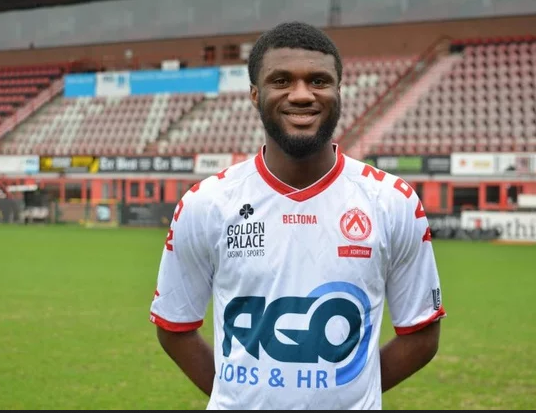 The 20-year-old arrives to the Golden Spurs Stadium on a three and a half years contract from Lithuanian first division side FK Riteriai.

Terem made his debut in 2017 for the Lithuanian first division team FK Kauno Zalgiris before moving to FK where the bulky striker was in an excellent scoring form with 20 goals in 29 matches.

His impressive scoring form in only his first season in the A Lyga with an impressive help him to win the Auksinis Batelis- an equivalent of the Golden Shoe award usually reserved for the player with the most goals in the season under review.

Moffi was subsequently won the club’ MVP of the Year, top scorer and Goal of the season awards and was on official League Team of the Week nine times and Player of the Month twice.

Moffi was a member of the preliminary Golden Eaglets squad to execute  the 2015 FIFA U-17 World Cup in Chile but was dropped by Coach Emmanuel Amuneke before the tournament.

His father Leo Moffi was a goalkeeper in his playing days during which time he kept goal for Enugu Rangers, Calabar Rovers, El Kanemi, Vasco da Gama and Black Cats Ogoja.