Over the years both players have shared 11 Ballon d’Or titles with Messi enjoying a slight edge with his latest win. 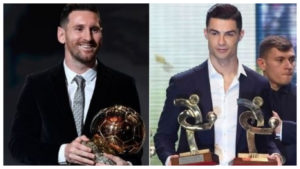 At the end of the day, fans’ opinion has been divided with some arguing that Ronaldo still remains the best irrespective of Messi’s achievements.

Between the two awards- Ballon d’Or and Serie A MVP which one is rated higher?

Fans compare Iheanacho with Zidane ahead of Watford clash