Boca Juniors players and officials were released by Brazilian police on Wednesday after 12 hours being questioned following a brawl at the end of their clash with local side Atletico Mineiro.

The Argentine giants’ players and staff are accused of attacking opposing players and the match officials, including with an iron bar, and smashing up objects in the stadium tunnel. 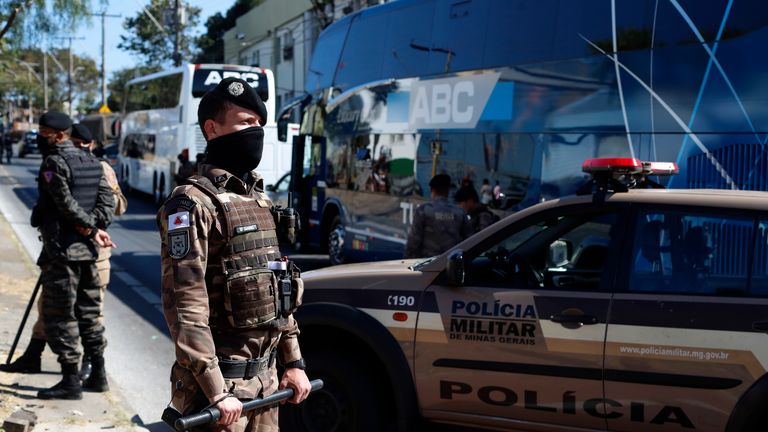 Boca blamed their behavior on the officiating, claiming to have been the victims of “malicious” VAR reviews that denied them goals in both legs of their Copa Libertadores last-16 tie.

The 30-strong Boca delegation, including former Manchester United defender Marcos Rojo, left the station just after midday in two buses, heading for the local airport ahead of their return to Buenos Aires, an AFP photographer observed.

They were released after paying a bond, which local radio station Itatiaia said was 9,000 reales (around $1,700).

Earlier press reports had wrongly identified Carlos Izquierdoz and two officials as amongst those accused of criminality.

Although only eight people faced accusations, the entire Boca Juniors delegation of players, coaches and officials went to the station following the chaotic end to Tuesday night’s Libertadores clash, and slept in their two buses.

After the match, won 3-1 on penalties by Mineiro following 0-0 draws in both legs, a mass brawl broke out in the tunnel, with police firing tear gas to subdue it.

The match referee was also assaulted.

Boca were angered during the match when they had a second half goal disallowed following a VAR review, an incident that sparked a clash between the two benches.

They also had a goal overturned on review in the first leg.

“Today our members, fans, players and coaching staff have been harmed in a malicious way, interpreting maliciously and intentionally the VAR technology,” said Boca president Jorge Ameal in a statement.

According to Mineiro’s press office, Boca players smashed everything in their path and threw objects as they returned through the tunnel to their changing room.

“On their way they attacked everyone they found, as well as breaking (water) fountains and protective barriers.”

Police eventually arrived on the scene and fired tear gas to break up the fight.

Mineiro said their director of football Rodrigo Caetano was attacked “with an iron bar.”

It is not the first time Boca have cried foul during the Copa Libertadores.

After a 2-2 draw at home in the first leg, Boca’s team bus came under attack on the way to River’s Monumental stadium for the second match, with several players needing hospital treatment for cuts and the effects of tear gas fired by police to disperse the crowds throwing projectiles.

Boca took an unsuccessful appeal all the way to the Court of Arbitration for Sport to try to be awarded the trophy but instead they lost 3-1 in the second leg, which was played in Madrid in an unprecedented move.

Pele hails ‘much more than footballer’ Marta after Olympics landmark

Man Utd to decide if Rashford will undergo shoulder surgery