Akinyemi didn’t disappoint as he scored the consolation goal against the French side in the 65th minute
of the match who won 2-1. 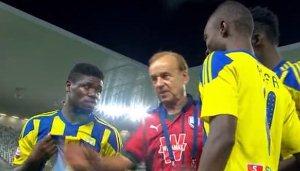 The player has scored 13 goals in 16 matches as well as scoring seven goals in three matches in the
Europa League qualifier.

Akinyemi joined the Latvian side from Albanian club side, KF Skenderbeu for as little as 180,000 euros
(N75.2m)

Rohr wasn’t disappointed with the free flowing style of play of Ventpils which allowed Akinyemi lots of
assists from his teammates.