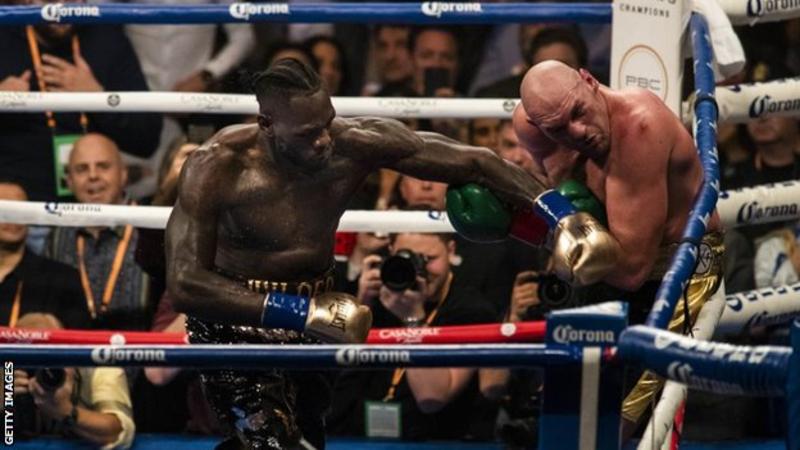 Britain’s Tyson Fury says a world heavyweight title rematch with Deontay Wilder is “likely to happen in March or April”.

Wilder knocked out fellow American Dominic Breazeale in the first round on Saturday to retain his WBC title.

“Wilder can’t run forever. This rematch has got to happen,” Fury, 30, told ESPN.

Fury, Wilder and Joshua are signed to different US broadcasters.

“All of a sudden I had a massive deal from ESPN and they made me an offer I couldn’t refuse. That would’ve been in May I believe.

“And Deontay Wilder apparently signed a three-fight deal [with Showtime] before I signed the ESPN deal.”

Wilder retained his WBC belt with a thrilling draw against Fury in Los Angeles in December.

The other recognised world heavyweight belts – WBA, IBF and WBO – are held by Briton Joshua, who is signed to the DAZN streaming service.

“If the fighters are willing to fight then why should the networks get in the way?” Fury said.

“Fighters use that as an excuse. Anthony Joshua, he uses that a lot as an excuse. I believe if the fighters really want to fight each other they will.”

AFCON 2019: I want to leave a legacy in Cameroon, says Seedorf