Luís Nazário de Lima of Brazil commonly known as Ronaldo is better than his namesake Cristiano Ronaldo, says Christian Vieri, with the former Inter striker considered to be a more fearsome frontman than the Juventus goalscoring machine. 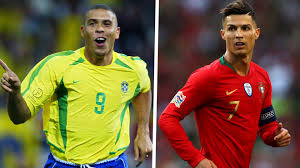 There is clearly something in that particular moniker when it comes to the art of finding the target, with two eras having been dominated by superstars with that name splashed across their back.

Through the late 1990s and early 21st century, the Brazilian two-time World Cup winner redefined the art of hitting the back of the net across spells at PSV, Barcelona, Inter and Real Madrid.

South American star Ronaldo, who will forever be remembered as O Fenomeno, is rightly assured of a place among the all-time greats.

He has been joined on that roll of honour by the Portuguese Ronaldo, who has also taken to re-writing the record books. A five-time Ballon d’Or winner has excelled across stints with Manchester United, Real Madrid and Juventus, with his exploits raising the bar of individual brilliance even higher.

Vieri, though, still ranks R9 over CR7, with the ex-Italy international having once formed a devastating partnership with the former at San Siro.

Asked to make his pick by the Daily Mail, Vieri said: “I am a friend of Ronnie and I was lucky enough to have him as a striker with me. He had it all. He was explosive, powerful and fast. He looked like a dancer, he seemed to dance with the ball.

“I say that Brazilian Ronaldo is better than Cristiano Ronaldo.

“CR7 is a war machine, he is admirable for everything he does and for all the things he continues to do. Cristiano can play up to 40 years with a cigarette between his lips, as they say in Italy. He has a sculptural physique.”

Vieri enjoyed the most productive period of his career while on the books at Inter, plundering 202 goals, but considers coaches he worked with at Juventus and with the Italian national side to be the finest he played under.

“At Juventus I say Marcelo Lippi, he was like a second father,” said a man who earned 49 caps for his country. “In Turin’s youth teams I was coached by the great [Rosario] Rampanti, then by [Emiliano] Mondonico.

read also:Rooney decides Messi vs Ronaldo debate over who is better

“I also have to say Cesare Maldini, he helped me break into the national team. He was a magnificent person who trusted young people.”