FIFA on Monday confirmed that Lionel Messi is the current best men player in Football.

The football governing body has also settled for Rapinoe as the best female player in the round leather game.

Other winners including the current best coach emerged at the Best FiFA Award held on  Monday night.

See the details in summary.

Liverpool manager Jurgen Klopp on Monday night won the men’s coach of the year at the Best FIFA Football Awards in Milan.

Klopp  was one of three Premier League bosses to be nominated for the award, alongside Manchester City’s Pep Guardiola and Tottenham’s Mauricio Pochettino.

Liverpool beat Tottenham Hotsports in the UEFA Champions League final in June and came second in the Premier League in 2018/2019.

“It is great, nobody expected this 20, 10, five, four years ago that I would be standing here,” Klopp said upon receiving his award.

“We know what an incredible job you Mauricio Pochettino did and what Pep did. I have to say thank you to my outstanding club Liverpool FC.

“To the owners thank you, they gave me an incredible team. I have to thank my team – as a coach you can only be as good as your team is. I’m really proud of being manager of such an incredible bunch of players. 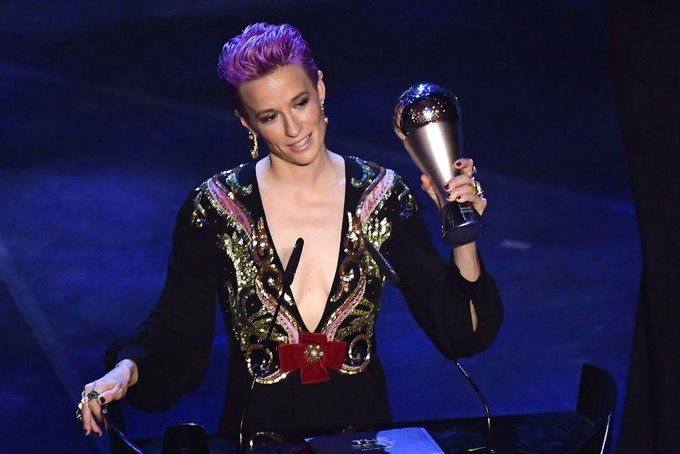 Megan Rapinoe has been named the Best FIFA Women’s Player ahead of USA team-mate Alex Morgan and England’s Lucy Bronze.

She won the gong with 46 per cent of the ranking points, ahead of Morgan (42 per cent) and Bronze (29 per cent) while England striker and Bronze’s team-mate Ellen White was voted tenth overall.

Rapinoe, 34, won the Golden Boot for most goals and Golden Ball for best player at the Women’s World Cup earlier this summer after helping the USA win the tournament with six goals and three assists.

Two of The Best

Real Madrid are the best-represented club in the 2019 Best XI announced during the The Best Awards gala.

In her acceptance speech as  The Best FIFA Women’s Goalkeeper, Sari van Veenendaal said that from a young age she wanted to be one of the world’s best footballers. Now shehas the hardware to prove it.

Sergio Ramos, Marcelo, Luka Modric and Eden Hazard have been named in the FIFA FIFPro World11 2019. Real Madrid are the best represented club in the line-up, which was announced during the The Best FIFA Awards gala. Club president Florentino Pérez headed up the Real Madrid delegation at the ceremony held in Milan’s La Scala.

Marcelo makes the team for the sixth time, after having been included in 2012, 2015, 2016, 2017 and 2018. Modric, meanwhile, as been recognised in each of the past five editions, whilst Hazard again features after having made the line-up for the first time last season.The full FIFA FIFPro World11 2019 line-up is as follows: Alisson, De Ligt, Van Dijk, Ramos, Marcelo, De Jong, Modric, Hazard, Ronaldo, Messi and Mbappé.

Amaju Pinnick: What has happened to Rohr’s Refresher Course?