Team USA beat Nigeria’s D’Tigress 81-72 in Basketball on Tuesday in the Tokyo Olympics Basketballer opener for both teams,  with  2020 WNBA MVP star A’ja Wilson netting 19 points and 13 rebounds in her Olympic debut.

The win was the Americans’ 50th consecutive victory in the Olympics dating back to a loss in the semifinals of the 1992 Barcelona Games.

The US women, who have dominated the tournament, found themselves in uncomfortable territory at the Saitama Super Arena as the Nigerians led 20-17 after the first quarter, pressuring the Americans into committing eight turnovers.

The US women regained their footing and took the lead halfway through the second quarter on a Diana Taurasi three-pointer that was part of a 23-0 run, which led to a 44-32 US advantage at the halftime break.

Refusing to go away, Nigeria cut the deficit, which was as much as 22, to eight points with just over three minutes left to play, before the US again steadied the ship with two quick baskets after a time-out. 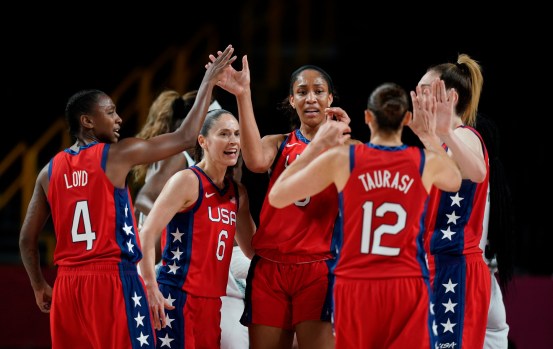 Brittney Griner was the second-leading scorer for the U.S. with 13 points, followed by Diana Taurasi (10), who played in her 33rd career Olympic game.

Brianna Stewart and Sylvia Fowles scored nine points each in the win.

The U.S. women will face Japan on Friday in their second preliminary game, with D’Tigress battling 2012 silver medalist France.

Read Also: Davidovich awaits Djokovic in the Tokyo Olympics round of 16

Veteran US captain Sue Bird gave credit to Nigeria for the defensive pressure they brought but took heart in the way her team was able to adjust.

“They like to make the game chaotic, they like to make you do things that you’re not used to doing, play a way you don’t want to play. It’s never going to be pretty against them,” she said.

Nigeria had four scorers in double digits led by Ezinne Kalu with 16. Their captain Adaora Elonu took away positives despite coming up short.

“It’s a mix of disappointment but also encouragement for us because we wanted some rhythm and we got that toward the end. So if we can carry that on for the next game it will be good,” she said.