Nigeria Professional Football League campaigners Wikki Tourists FC were involved in an accident that left team bus burnt to ashes along Kibo road around the popular forest area after Jos in Plateau state.

The Bauchi-based outfit were on their way to Uyo, Akwa Ibom state, to honour the NPFL match day 11 against Dakkada FC. 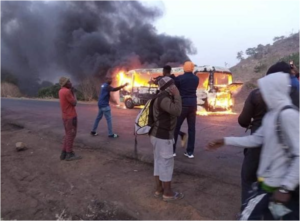 Read Also: UCL: FC Porto defeat sloppy Juve to take first leg lead
According to reports, the NPFL side left their base in Bauchi around 4.30am this morning, but the sad incident occurred about minutes to 7.00am near Jos.

Luckily, no life was lost in the inferno except for players and club officials, who lost values that include bags and phones.