Moussa Dembele has put his five-bedroom luxury mansion up for rent following his deadline-day switch to Ligue 1 side Lyon.

The Frenchman made his £20million move back to France after two successful years in Scotland where he became a fan-favourite at Celtic Park. 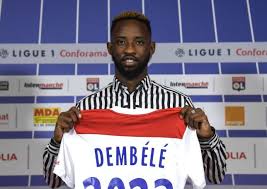 The 22-year-old had been living in the luxury villa in Bothwell, Lanarkshire, which is known to be a popular location for footballers

However, to get your name on the tenancy, residents will have to fork out a deposit of £3,650 before handing over £2,650 a month in rent.

An official guide for the property describes it as a ‘fabulous executive villa by Cala Homes occupying one of the most prominent plots within this prestigious development.’

It also boasts a ‘stunning’ formal lounge with a formal dining room, five sizeable bedrooms with two en-suite bathrooms, a family bathroom and a large driveway complete with a double garage.

It comes with a fully fitted kitchen, an open hallway and is situated in a sought after location.

As he tried to bag himself a move back to his homeland after two successful seasons with the Hoops, a removal van was spotted outside the property and photos of it quickly spread on social media.

The transfer eventually went through and the house was immediately put back on the market as Dembele shipped his possessions back to France.