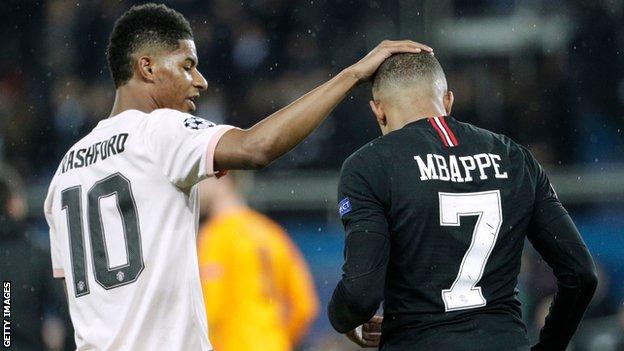 Marcus Rashford had to console Kylain Mbappe after United stole the show in Wednesday’s EUFA Champions League Clash in Paris.

Rashford’s injury-time penalty capped the remarkable turnaround as United reached the quarter-finals at the expense of shell-shocked PSG.

United pulled off a remarkable result at the Parc des Princes, overturning a first-leg deficit to win 3-1 in the French capital thanks to a brace from Romelu Lukaku and Marcus Rashford’s controversial stoppage-time penalty.

While some of the united players were jubilating and celebrating their victory a part in Rashford still empathies Mbappe and the entire PSG side.

United dressing room after the match was positively bouncing as the players blared loud music, sung chants and danced around.

According to RMC Sport, PSG felt the celebrations crossed a line, spilling out of the dressing room, and the atmosphere got increasingly tense between the sides as the evening wore on.

There was a sombre, stunned silence in the home side’s dressing room and they could hear United’s celebrations loud and clear, with security called in to ‘bring calm’ in the lobby between the two changing rooms.

But it was a former United player who annoyed PSG officials most, with Patrice Evra – part of United’s delegation in Paris – allegedly singing, screaming and dancing at the tunnel entrance. A source said it became ‘too much’ and there was a sense that Evra in particular could have showed more restraint and respect after such a gut-wrenching defeat for the hosts.

Incredibly, it took almost an hour for the first PSG player to leave the dressing room after full-time, with the squad stunned by their exit.

The defeat makes it three successive seasons that the big-spending French champions have failed to progress past the last 16 of the Champions League, having also thrown away a 4-0 lead against Barcelona in the 2016/17 season.

Joshua tells Miller: It’s all about training, not steroids