The Blues reversed their midweek fortunes, when they were on the end of a 4-0 hammering by Bournemouth, inspired by their on-song talisman and their new signing before David Luiz completed the scoring late on.

With their biggest win of the season, Chelsea regain fourth place from Arsenal who visit champions Manchester City Sunday

Huddersfield came close to taking a surprise lead on seven minutes when Aaron Mooy headed Chris Lowe’s near-post cross narrowly over the crossbar, but the goalmouth action thereon-in was focussed at the other end.

Silky interplay between Higuain and Hazard teed up the Belgian for a 20-yard shot which Jonas Lossl gathered at the second attempt, but it wasn’t long before the Huddersfield goalkeeper was picking the ball out of his net.

Higuain got off the mark for the Londoners with a sharp first-time finish through Lossl on 15 minutes, an emphatic shot on the turn following N’golo Kante’s disguised pass.

The on-loan Juventus striker nearly had a second five minutes later when Marcos Alonso found his near-post run, from which Higuain flicked into the side-netting.

Luiz squandered an opportunity to double Chelsea’s advantage on 33 minutes when he sent a free header wide.

Huddersfield’s best spell of the match came in the 10 minutes before the break, with the counter-attacking runs of Adama Diakhaby leading to shots from Philip Billing and Mooy which were both blocked by Andreas Christensen. 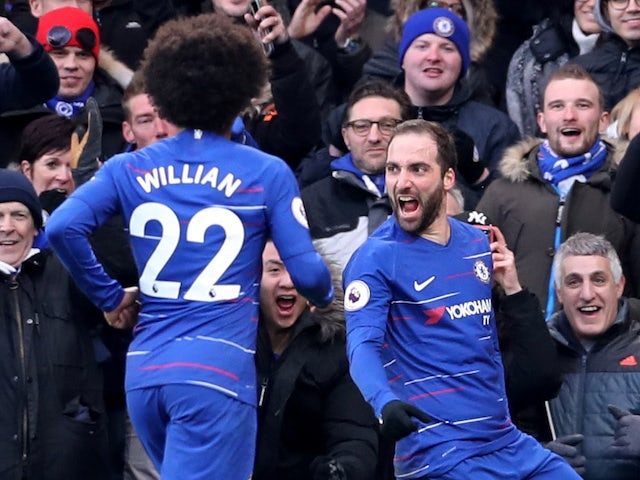 The timing of Chelsea’s second goal killed the spirit that was in the Terriers’ first-half performance, with Elias Kachunga conceding a penalty for bringing down Cesar Azpilicueta as the Chelsea captain charged into the area

Hazard dispatched the spot kick into the bottom corner, and the Belgian felt that he should have had another chance from 12 yards in stoppage time when he was tripped from behind by Juninho Bacuna, but referee Paul Tierney said no on this occasion.

Tierney could have evened up the penalty count on 56 minutes when Christensen clipped Kachunga but Huddersfield were not handed a way back into the contest, and were out of it courtesy of Hazard’s second goal 10 minutes later

The former PFA Player of the Year brought Ross Barkley’s cross under control with a deft first touch, and then rounded Lossl to slot home his 12th Premier League goal of the season from a tight angle.