Chelsea are asking a staggering £45million for Michy Batshuayi to slow the race for the Belgian striker. 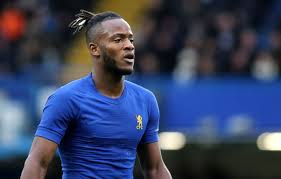 Stamford Bridge chiefs are quoting the massive figure to interested clubs, with Crystal Palace and Aston Villa reeling at the news.

Chelsea claim they will not send Batshuayi, 26, out on loan again after his recent stint at Palace — but the impasse may cause a long-term problem.

Villa will not offer that much and neither will the Eagles, although Chelsea think the tag is justified because target Wilfried Zaha is valued by Palace in the £100m range.

However, Batshuayi is going to be out of contract in 18 months when he can go for nothing.

‘kisses goodbye to fans after agreeing terms with Man Utd’

Batshuayi has struggled at Chelsea since arriving from Marseille for £33million in April 2016.

But he has yet to start under Blues’ boss Frank Lampard.

You can go to hell, PSG president rejects LaLiga complaints on Mbappe-Real Madrid…

EPL: I won’t blame my players for our loss against Arsenal, says Everton boss…

You can go to hell, PSG president rejects LaLiga complaints…