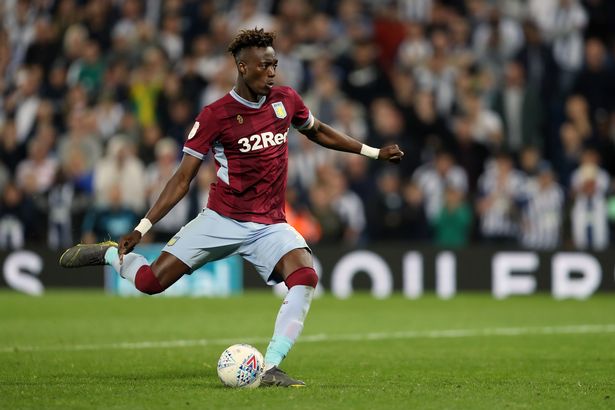 Kevin Oghenetega Tamaraebi Bakumo-Abraham (born 2 October 1997), known as Tammy Abraham, may be wearing jersey No 9, for the Blues for the 2019/2020 football season in England, if fans call-out is heeded to.

The Nigerian-British star striker became a spotlight and talking point for football fans and enthusiasts after his exploit for Aston Villa where he played the current season on loan from the Stamford bridge.

The Baggies went into the second leg trailing 2-1 from the first-leg at Villa Park a game in which Abraham also scored in, but managed to force extra-time and penalties thanks to a 1-0 win on the night despite losing Chris Brunt to a red card.

However, it was the visitors who kept their nerve from 12 yards.

Steer set the tone by saving the first two spot-kicks and after Albert Adomah has missed the chance to send Villa to Wembley, it was down to Abraham to complete the job.

And that’s exactly what he did. The 21-year-old expertly tucked away his spot kick to spark jubilant scenes from the travelling Villa supporters and the club are now just one win away from returning to the Premier League.

Speaking after the game, Abraham heaped praise on Steer and revealed why he was so confident in scoring his penalty.

“What a keeper – I’ve missed a couple against him,”he said. “I’m used to the pressure, I like the pressure.”

Not only were the Villa fans delighted with Abraham’s impact, but a number of supporters from his parent club have had a lot to say.

READ SOME OF THE CHELSEA’S FANS REACTIONS ON TWITTER BELOW

Tammy Abraham with the promotion-winning PK! Hope to see him at the Bridge next season. #CFC #AVFC #ChelseaLoanArmy

He won’t go on another loan now. He either stays, or he goes permanently. He won’t be an elite striker immediately, but I have full faith he could get 10-15 league goals in a season, which is much better than what we’ve had this season

@gate17marco
I want him in my team next season.

Must be starting next season

I don’t think Tammy Abraham is the finished article. I do however feel he deserves a good chance in this Chelsea team especially with a potential ban. A young English player coming through our youth team. I just hope the club can show some faith in him, I know the fans would.

How I overcame racist abuse as a teenager, by UFC champion Adesanya

FIFA U20 WORLD CUP: Flying Eagles will shock the world in Poland – Makanjuola