A Chinese football fan has adopted English Championship side, Middlesbrough as his second club because of Nigeria international, John Mikel Obi. 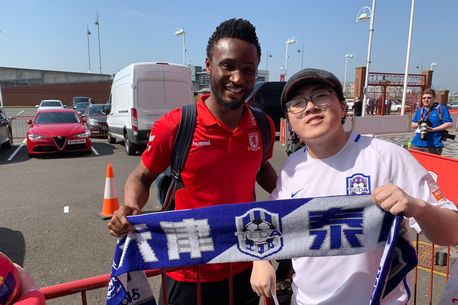 Guanpeng Wang, or Sam as he likes to be called supports Chinese club Tianjin Teda that Mikel played for when he left Chelsea last season.

The 23-year-old who is in England on an internship programme was at the stands last Friday when Middlesbrough faced Stoke City which the Teesside won by a lone goal.

He also got a signed shirt from Boro.

“I came to the game for Mikel and I didn’t really know much about Boro, but Boro included me in this lovely community and I’m really grateful for the help that I received,” he told TeessideLive afterwards.

“Before I went to the game I did some research about the atmosphere so I could join in with the chants. I felt at home. I’d like to come back for more games. I am now planning to join the Chinese Middlesbrough fan club.”

Sam revealed he felt bad when Mikel left Tianjin at the back end of last year but continued to follow the midfielder.

“Tianjin TEDA is not famous for signing big names,” he added.

Quadri was too strong for me, admits Iran star