Speaking in an interview with Diamond Academy TV, Chukwueze named the Dutch ace as one of his biggest influencers in the round leather game.

Like Robben, the Super Eagles winger is left-footed and usually plays out on the wing, where his breathtaking speed and twinkle toes see him dazzle defenders week in, week out.

He really is fearless with the ball at his feet and this has lead him to create countless goal scoring opportunities for himself and his teammates alike, making him a key player for Villarreal at just 19 years of age. 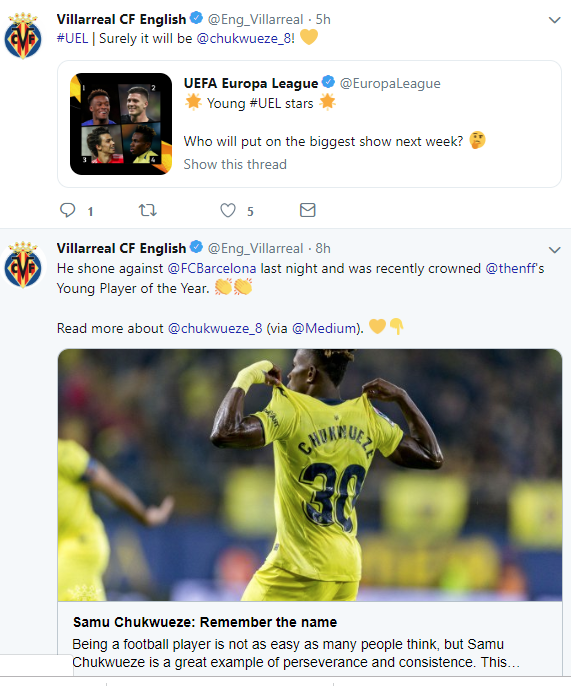 According to Villarreal legend Santi Cazorla, the Nigerian youngster is a professional with class and not a promising star and this has not gon unnoticed by his teammates.

“Chukwueze is known for being a player that never gives up, and he is always ambitious to win every game. He is unquestionably, an excellent young player and this has not gone unnoticed by his teammates.

“That will help his career here at Villarreal and maybe even beyond. The reason why he is here is because he is special.”

The Super Eagles winger who was on target for hosts Villarreal as FC Barcelona survived a scare in an eight-goal thriller on Tuesday now has four goals from 19 games in his kitty with two assists.

Ever since he was a kid, Chukwueze loved football and lived for the game. He always wanted to play for a big team in Europe and help his family economically at the same time.

In the beginning, his parents didn’t want him to play football because they thought that having an education was more important than anything else. Eventually, his parents allowed him to do what he loves to do because they truly realised the special talent their son possesses.

Chukwueze started his career at the age of five playing for the, aptlly named, Future Hope Academy. Then, he decided to join one of the greatest football academies in Nigeria, the Diamond Football Academy. He was noted for being a complete and outrageously talented player from such a young age.

He caught the attention of many because he was part of the Nigerian national team that won the 2015 U17 World Cup, and he also collected the bronze boot award. He scored three goals and got three assists during the tournament; including a goal after 25 seconds of play in the game against Chile. The Nigerian U17 national team beat Brazil in quarter-finals.

This was hugely impressive because Brazil were one of the favourites to win the tournament that year, but it was Chukwueze that went on to lift the trophy.