Chelsea Manager Antonio Conte’s wife, Elisabetta, was not at a press conference on Wednesday ahead of Chelsea’s away clash against Burnley but she nonetheless played a prominent role at the event thanks and no thanks to a simple phone call.

Conte left the media in stitches on Wednesday after a phonecall from his wife interrupted his pre-match press conference. 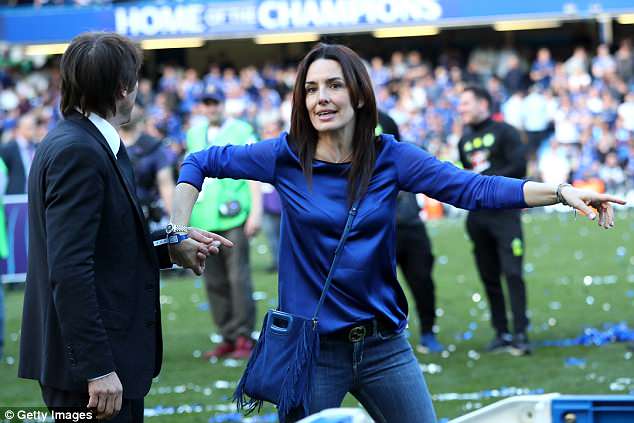 The Italian coach is preparing his struggling Blues side for their trip to Burnley, with the boss knowing a loss on Thursday will further dampen their chances of finishing in the top four this season.

And he was midway through talking about Marcos Alonso’s availability — the left back has been hit by the FA with a violent conduct charge — when his phone began to ring.

It turned out the caller was Conte’s wife, with one journalist joking that it was for him to pick up the milk on the way home.

The former Juventus manager found the funny side though, even suggesting he deserves a fine following the untimely interruption.

He said: ‘It was my wife. Always in the worst moment. I’m sorry.

‘You can give me a fine! I’m sorry because I’d be annoyed if it happened to one of you.’

Pep Guardiola’s team were crowned champions last weekend with five games of the season still to go and boast a 16-point lead over second-placed Manchester United.

Conte said: ‘Manchester City is one club that can continue to dominate, to win, not only in England, but also to fight for the Champions League.

‘They have the possibility to do this. It is a very strong club, they have an important squad with great players and are a club that want to invest and improve. There are a lot of things that are right.’

Chelsea, in contrast, go into Thursday’s clash with Burnley with their top-four hopes hanging by a thread.

The Blues trail fourth-placed Tottenham by eight points, even if Spurs have played a game more.

On his side’s chances of qualifying for the Champions League, Conte said: ‘We have to try until the end to reach this target.

‘If we want to be realistic with five games to go, it’s not simple to reduce the gap, but we must have the will to fight, the desire to take this target. Why not?

‘We have an important game against Burnley, a really strong team having a fantastic season and it won’t be easy to get three points.’

Chiwell tipped for Chelsea exit after being berated by…