Both teams took off on a bright note defeating their first opponents UMS de Loum of Cameroon and Defense Forces of Ethiopia respectively. 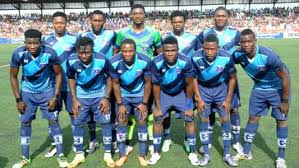 Lobi face Gor Mahia away in the first leg between December 14-16 in Nairobi while the second leg will be played between 21-23 December either in Makurdi . Lobi played their second leg against UMS de Loum on Wednesday in Enugu.  The winner of the two legged battle will zoom into the CAF Champions League group stage.

Rangers international will equally play their first leg away to Algeria between 14-16 December before returning for the final leg between 21-23 December in Enugu. Rangers’ opponents Union Sportive Musulmane de Bel Abbès established in 1933are debutants to the CAF Confederation cup and had earlier in 1992 made an appearance in the Cup winners’ cup in 1992 exiting in the second round.

Lobi Stars opponents on the other hand are more formidable and seasoned club with ample experience in the continental competitions since dating back to 1987.

They have won the Kenyan league a record 17 times

They once had a Nigerian footballer Abbey Natty Kurumi Sunday in their squad.