CSED to develop 10 Edusport Hubs in the Niger Delta

Community Sport and Educational Development, (CSED) is to work with relevant stakeholders to develop ten Edusport Hubs (Centres of Sports and Educational Excellence) in the Niger Delta area of Nigeria. 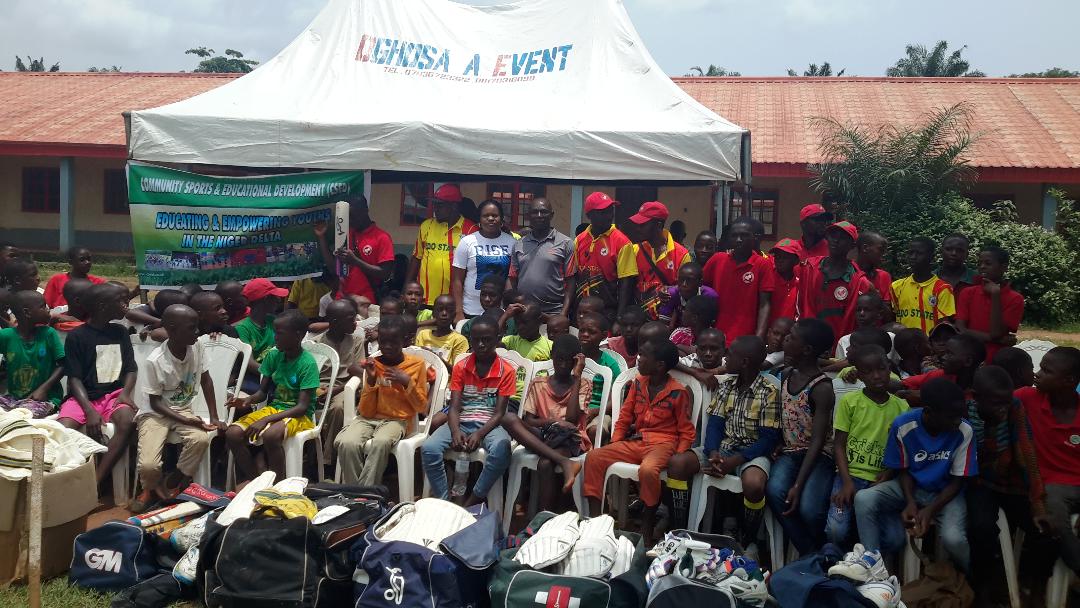 This was disclosed in a speech delivered by Mr Edema Fuludu (National Coordinator of CSED) during the event that was held at the cricket oval of Edo Boys High School (Benin City). During the occasion, different cricket equipment was handed over to the students of Edo Boys High School. The cricket equipment was freely donated to CSED by Lord’s Taverners (a UK based charity). The entire package donated to CSED weighed more than 450 kilogrammes.

Barrister Abraham Oviawe (Deputy Vice-Chairman of Edo Cricket Association), representatives of the NCF, staff of the school, coaches and seventy students of the school attended this event. Edo Boys High School is one of the leading cricket schools in West Africa.

Fuludu stated that the choice of Edo Boys High School is informed by the progress the school has made in the past decade by taking cricket to the children of the “common man” in Nigeria.

As a result, CSED would want to complement the good work of the NCF and Mr Uyi Akpata in making the school a sporting hub. In the next three years, CSED will work with the government of Edo State in promoting their

“Edo BEST” programme, by working to make Edo Boys High School an Edusport Hub (Centre of Sports and Academic Excellence). Furthermore, Fuludu stated that the donation of the cricket equipment is part of the journey which the NCF, the old Boys Association of the school and Mr Uyi Akpata started some years ago.

Furthermore, Fuludu stated that CSED will support the efforts of the school stakeholders in future; by donating books and other reading materials, by training the school teachers and staff on safeguarding of the students. Safeguarding of students and athletes is the main focus of CSED facilitators during their training of Game Masters/Mistresses. CSED intend to train 1500 teachers within the next three years. Participation in CSED training for teachers (Game Masters/Mistresses) is free and the intention is for it to remain free during the three years’ period of CSED intervention in this sector in the Niger Delta area.

Following CSED recent partnership with the Nigeria Cricket Federation, they would be expected to promote the development of grassroots cricket by introducing cricket to schools, training of Game Masters/Mistresses, as well as training of cricket umpires.

Sixth seed Jabeur knocked out of French Open in first round

NBA: Adebayo steps up as Heat battle past Celtics to take…