Ese Brume has won gold for Nigeria in the women’s long jump at the 2022 Commonwealth Games in Birmingham, United Kingdom.

Brume had a no jump on her first attempt but bounced back right away to jump 6.99m to take the lead in the final and set a new Games Record. 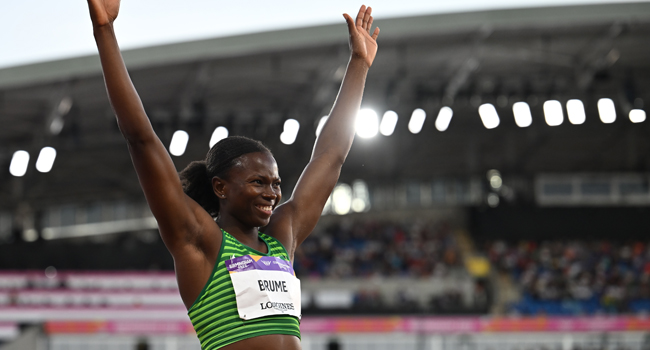 Nigeria’s Ese Brume celebrates winning and taking the gold medal in during the women’s long jump final athletics event at the Alexander Stadium, in Birmingham on day ten of the Commonwealth Games in Birmingham, central England, on August 7, 2022. (Photo by Ben Stansall / AFP)

She added no jump, 6.99m, 6.81m, 6.99m, and 6.96m in her subsequent jumps but none of her opponents could match or surpass her thereby securing gold with a jump to spare.

However, on her very last attempt, Brume jumped seven meters for another Games Record to become the first woman to jump that far in the history of the Commonwealth Games.

Brume has been arguably Nigeria’s most consistent athlete over the past four years.

She burst onto the scene by winning gold as an 18-year-old at the 2014 commonwealth games in Glasgow but could not defend her title four years ago in the Gold Coast in Australia.

However, since then, She has been on a consistent run, winning bronze at the World Athletics Championships in Doha in 2019. She followed that up by winning another bronze at the Tokyo 2020 Olympics.

She took it up a notch higher by winning silver at the World indoors in March before matching the feat on the biggest athletics stage in Eugene, Oregon two weeks ago. 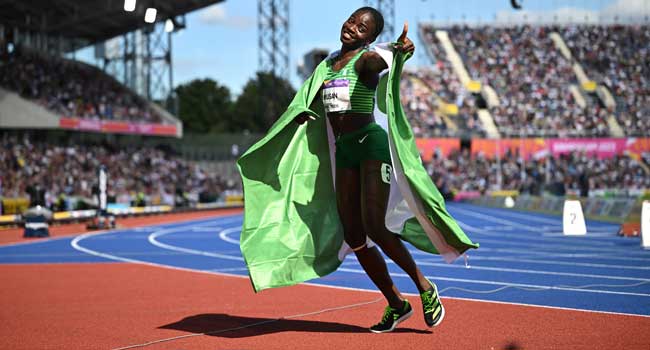 Nigeria’s Tobi Amusan celebrates winning and taking the gold medal in the women’s 100m hurdles final athletics event at the Alexander Stadium, in Birmingham on day ten of the Commonwealth Games in Birmingham, central England, on August 7, 2022. (Photo by Ben Stansall / AFP)

The Nigerian lined up in the final as favourite for gold and there was no stopping her as she blazed to a new Games Record of 12.30 seconds to retain the title she won four years ago in the Gold Coast, Australia.

Devynne Charlton finished a distant second to win silver for the Bahamas while Cindy Sember whose father is Nigerian won bronze for Great Britain.